Posted by: Pro Gardener in Gardening May 4, 2018 Comments Off on Entrance to old Cumbooqueepa, the residence of Thomas Blacket Stephens, South Brisbane, ca. 1872 172 Views 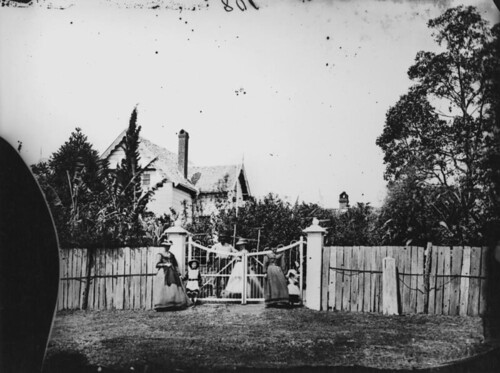 Description: T.B. Stepehens, the owner of old Cumbooqueepa, was a Member of the Queensland Legislative Assembly, a former Mayor of Brisbane, and (for ten years) proprietor of the Brisbane Courier newspaper. He also owned fellmongeries and wool scourers at Cleveland and Ekibin and acquired extensive landholdings in the Nerang district in the 1870s. His home was one of the grandest in the South Brisbane area, and remained so until ca. 1890, when it was demolished to make way for the South Coast railway line. His elest son William Stephens then erected a larger house on a higher site nearby. The original Cumbooqueepa with its decorative barge-boards, brick chimneys and substantial outbuildings stood on 16 acres of land and had a large garden stocked with banana plants, hoop-pine and prickly pear. The man standing behind the front gate was probably the gardener.

View this image at the State Library of Queensland: hdl.handle.net/10462/deriv/9473