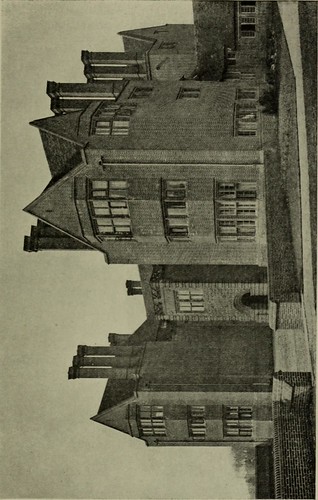 Text Appearing Before Image:
to the evidence it brings of ver-satility. Some of its rooms take us back to the days ofJames I in so convincing a fashion that when the doorsare shut the twentieth century fades from our minds.Many years ago John Langtons house on the Welsh Back,Bristol, fell from its high estate as the palace of a merchantprince, and it served for some time as a tobacco factory,until the tide of commerce overwhelmed it in destruction.Its owner, Mrs. A. S. Franklyn, determined to build ahouse worthy to enshrine its more splendid rooms, andNew Place is the result. The task was no light one—todevise a shell worthy-of so fine a kernel, while yet avoidingmere imitation, but the problem was admirably solved.I am not here concerned with the imported glories of JohnLangtons home, but with their enclosing shell, which byits treatment stands confessed a modern house. In itsinternal treatment Sir Edwin did not attempt to competewith the sumptuous relics of the past, the noble plaster New Place, Shedfield 103

Text Appearing After Image:
H55 O 05fH W uv. < 05H% w Q w QW asc/) wo < PL, 5S 104 English Brick-building ceilings and panelled walls and carved fireplaces of the oldrooms, and wisely so. Everywhere at New Place, save inthe old work, there is a simplicity of treatment almostmonastic in its severity : the brick mullions are plainlyplastered on the inside and square edged, and the window-sills are of red brick, their surface enriched by the simpleprocess of waxing them. Everything conspires to heightenthe effect of the Bristol work, and to proclaim that thebuilding has its own character, instinct with the modernsense of decorative restraint. As to the outside, I began these notes by saying that itis the apotheosis of modern English brick-building, andnothing less is true. It would be difficult to estimate toohighly the value of well-proportioned and well-burnt Englishred hand-made bricks, a product of sound craftsmanshiptoo little seen until very recent years. The moulded bricksof the mullions and the curved