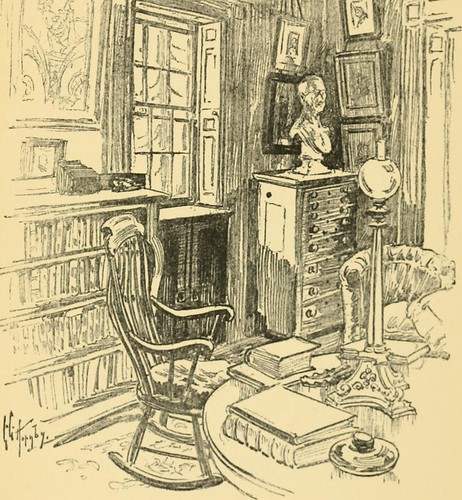 Text Appearing Before Image:
ow accretions around anoriginal idea; and the men and women about him,life and nature as he read them, were more to himthan printed pages. So he had no need of theparaphernalia of the student. He seldom quoted.His books are full of native and homely illustrationsthat serve to mark one difference between him, ourgreat thinker, and all the philosophers whom Europeand Asia had produced. The study is very simply decorated. In onecorner stands the bust of a dear friend. On thewalls are photographs and engravings, some of themmementoes of European acquaintances. Over theblack marble fireplace hangs an oil copy of Michel-angelos Fates, a symbolic picture which couldnot be more appropriately hung. The furniture isof a good New England period. The room is bright;it expresses, as does the house, the large simplicityand unvarying cheerfulness of the man who for somany years inhabited it. In one other Concord house did Emerson do hiswriting, the Antiquarian house, then a boarding- [108] / Ii it I

Text Appearing After Image:
In Emersons Study THE NEW YPUBLIC LIBRARY MT»*, LENOXTILPE-N FOUNDATION! _ Chiefly Literary house to which he escaped when the press of wor-shipping Transcendentalists broke in too muchupon his time. Behind the Emerson house spread its gardens,where in his earlier period Emerson used to work.Then occurred that friendly rivalry between him-self and his wife of which he so quaintly tells : didhe plant vegetables, flowers came up in their places.Mrs. Emerson was a lover of gardens; she broughtwith her from Plymouth many of her favorite plants,and year by year gave their descendants about in thevillage,—a neighborly habit followed by her admi-rable daughter, so that many Concord gardens havecome, in part, from this Emersonian enclosure.But it was not Mrs. Emerson who drove her hus-band from the work of gardening. He did not loveit. His little Waldo, anxiously watching his fatherat work, cried, Papa, I am afraid youll dig yourleg ! The philosopher has given us his own ac-count of the in

Image from page 299 of “The standard cyclopedia of horticulture; a discussion, for the amateur, and the professional and commercial grower, of the kinds, characteristics and methods of cultivation of the species of plants grown in the regions of the Unite

Arthur “Gramp” Roos (center) with the gardening class at Edenwald

Image from page 188 of “Garden and forest; a journal of horticulture, landscape art and forestry” (1888)