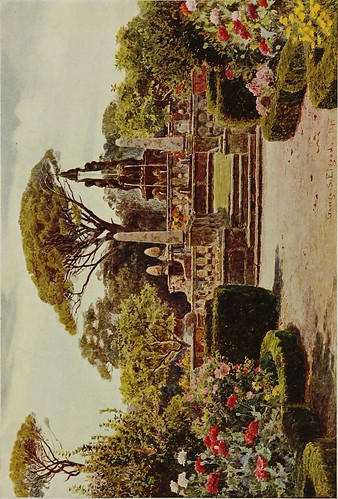 Text Appearing Before Image:
hes. The misfortune is that no reliable name has comedown to us in connection with this exceptional piece of work. Under the Cardinals personal supervision such progress was made thatthe fame of it was noised abroad, and he received an intimation from Rome,which he could not afford to ignore, that the money he was spending solavishly on the embellishment of his villa would be better employed inworks of charity. Fortunately much had been already completed, but sointerested had the Cardinal been in the fountains and other works abouthis garden, that only one casino of the two he had planned was built, andso matters remained until his death. No such restrictions seem to have been placed upon his successor,Alessandro Damasceno Peretti, Cardinal Montalto, a nephew of PopeSixtus v., who, about 1588, built the second casino in order to balance thefirst, and made various changes and additions in other parts of the villa.The work done in his time may be readily distinguished by his armorial 72

Text Appearing After Image:
bearings (the lion, the three-lobed mount, and the star), which in someform or other are introduced on several of the fountains, &c. When it is considered that the various works about this villa musthave extended over a period of fifty years or more, it is impossible topraise too highly the spirit which animated the successive artists whocarried them out. So entirely in harmony are these works,that they almostgive the impression that the whole villa was the conception of one mind. The ground on which the garden is laid out falls with a gentle slopeand is cut into a series of four or five terraces. The water, brought froma distance in an aqueduct, enters the villa at the topmost level, and,working its way downwards, passes through the various fountains in suc-cession ; thus giving the maximum effect. The two casini are placed at the opposite ends of the first terracefrom which they are entered, the ground floor being occupied by aloggia of three arches which opens on to the parterr