Home » Gardening » Image from page 135 of “Bird neighbors. An introductory acquaintance with one hundred and fifty birds commonly found in the gardens, meadows, and woods about our homes” (1916)

Image from page 135 of “Bird neighbors. An introductory acquaintance with one hundred and fifty birds commonly found in the gardens, meadows, and woods about our homes” (1916)

Posted by: Pro Gardener in Gardening February 25, 2020 Comments Off on Image from page 135 of “Bird neighbors. An introductory acquaintance with one hundred and fifty birds commonly found in the gardens, meadows, and woods about our homes” (1916) 24 Views 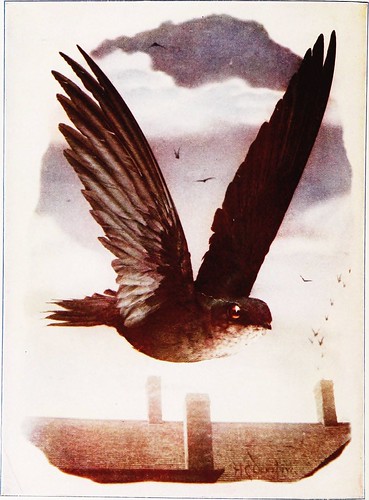 Text Appearing After Image:
ri[[MXi.:v SWIFT DUSKY, GRAY, AND SLATE-COLORED BIRDS Chimney Swift {Chatura pelagica) Swift family Called also: CHIMNEY SWALLOW; AMERICAN SWIFT Length—5 to 5.45 inches. About an inch shorter than the Eng-lish sparrow. Long wings make its length appear greater. A4ale and Female—Deep sooty gray; throat of a trifle lighter gray.Wings exteinB an inch and a half beyond the even tail, whichhas sharply pointed and very elastic quills, that serve as props.Feet are muscular, and have exceedingly sharp claws. Jiange—Peculiar to North America east of the Rockies, and fromLabrador to Panama. Migrations—April. September or October. Common summerresident. The chimney swift is, properly speaking, not a swallow atall, though chimney swallow is its more popular name. Rowingtowards the roof of your house, as if it used first one wing, thenthe other, its flight, while swift and powerful, is stiff and mechan-ical, unlike the swallows, and its entire aspect suggests a bat.The nighthawk and whippo

Treasury Of Gardening. Hardcover. A Sourcebook For Every Gardener

Image from page 81 of “The English flower garden and home grounds : design and arrangement shown by existing examples of gardens in Great Britain and Ireland, followed by a description of the plants, shrubs and trees for the open-air garden and their cult