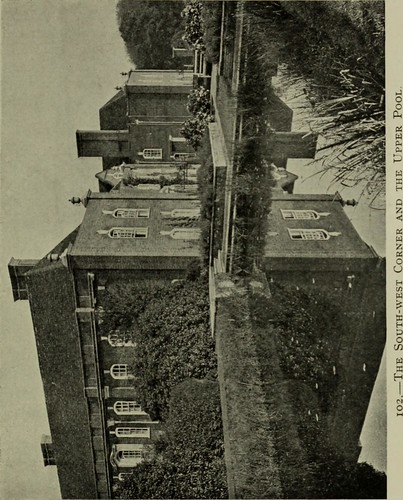 Text Appearing Before Image:
from the tool andlooking very fresh and pleasant. Upstairs the bedroomsare planned on ample lines, and the treatment of one of thebaths with white marble top and an ebony case of openfretwork, hung behind with a gay-coloured fabric, representsan unusual idea (Fig. ioi). The garden terrace enclosedby the new wings are sunless, but that is the fault of theold builders, who placed the house so oddly on its site.We walk round, therefore, by the north-west corner, toseek the most gracious part of the garden, which stretchesaway from the new west front. This elevation, seen in partto the left of the photograph in Fig. 102, is gravely elegant.The general character of the old house is maintained, thekeystones being based on the old work, but improved intheir proportion. Facing it from the midst of a little pavedrose garden is Father Time, an old leaden figure, silverywhite and armed with scythe and hour-glass. Runningwestwards from the north corner is a pair of garden-houses Temple Dinsley H3

Text Appearing After Image:
144 Temple Dinsley divided by a pillared loggia, and the ground rises into alawn flanked by raised terraces, which turn into paths underthe trees and bring us to the upper pool. Fig. 102 showsthe south-west corner clearly mirrored in it, and the gracefullead vases crowning the angles. Some of these are originalornaments of the house ; others are faithful copies. One ortwo have been kept in the garden, which is fortunate, fortheir drums are gay with little classical scenes in clear relief.In a quiet house like this, where the effects are won bysheer Tightness of proportion, little incidents, like thedancing of garden gods on the side of a vase, give a senseof pleasure altogether out of proportion to their intrinsicmerit. I remember with what peculiar pleasure I made my surveyof this gracious country home, with its sober Georgian flavour.The great plain spaces of red brick that mark the sidesof the new wings and the quiet line of the gables north andsouth are elements far removed from t