Posted by: Pro Gardener in Gardening August 6, 2018 Comments Off on Image from page 16 of “School gardening and nature study in English rural schools and in London” (1909) 238 Views 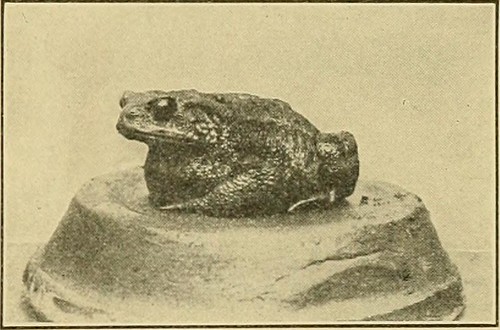 Text Appearing Before Image:
of the body.In the observatory hive there are six combs built by the bees into the woodenframes supplied to them. Above the large combs is a space for the bees to puttheir surplus honey. The combs hang vertically and consist of two rows of six-sided cells placedback to back, having the openings laterally directed. Two sizes of cells arebuilt. By far the larger number run five to the inch. These are called workercells, for in them the eggs laid by the queen will develop into workers. Theymay be also used for storing honey and pollen (beebread). Cells of a largersize running three to an inch are built as cradles for drones. These are alsoused as storerooms. The cells built for the cradles of royalty are of a peculiarshape, having the openings directed downward. Bees are important agents in plant fertilization. When visiting flowers tosuck up honey from the nectaries or honey glands, the pollen gets caught intheir hairy bodies and is thus carried to other flowers. The honey is carried204

Text Appearing After Image:
Fig. I. Tom, the borough toad. 12 to the hive in the crop. Pollen for beebread is also collected and kneaded intosmall masses and carried home on the hind legs in little depressions called honey bags. A good queen, under favorable circumstances, in the height of the seasonwill lay 2,000 to 3,000 eggs a day. A single egg only is laid in each cell. It isa tiny white speck which may be seen lying in the bottom of each cell. Onthe fourth day a white maggot larva hatches out of it, which is constantly fedand attended to by the workers. As it grows it becomes curled around in thecell and looks very like a pearl button. On the ninth day it spins a cocoonand becomes a chrysalis. The workers cover the cell with a cap of wax mixedwith pollen. On the twenty-first day, the young bee, having acquired duringher chrysalis sleep her wings, legs, eyes, etc., eats off the roof of her cell andpushes her way into the world. Drones take twenty-four to twenty-eightdays to develop and queens seventeen to ni