Posted by: Pro Gardener in Gardening September 27, 2019 Comments Off on Image from page 198 of “The Annals of Horticulture and Year-Book of Information on Practical Gardening” (1850) 109 Views 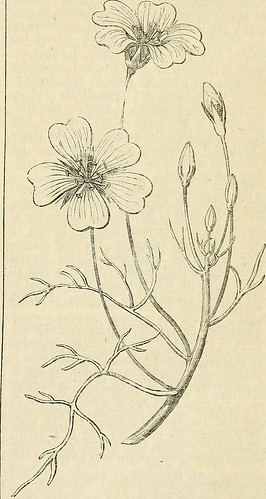 Text Appearing Before Image:
botanical adepts will readily comprehend whenthey are requested to compare the accompany-ing engraving of the new Limnanthes withthe familiar garden plant, the common Nastur-tium. Thus it is that botanical affinities arelittle influenced by prima facie appearances. Both the species of Limnanthes are of the same habit of growth. Tliey are prostrate,succulent herbs, of annual duration. In L. roseathe leaves are very variable in their form;they are usually pinnate, or even sometimesbipinnate, with all the parts extremely narrow;but sometimes they have only a pair of sidelobes, and sometimes none whatever. Theblossoms, consisting of five inversely heart-shaped petals, stand up on stalks much longerthan the leaves ; they grow singly from theaxils, and are described as being of a pale,dirty rose-colour. We should, however, ima-gine, that as the summer of 1848, duringwhich only it has been grown in England,was wet, and unfavourable to the high deve-lopment of colours, this plant may prove in

Text Appearing After Image:
brighter seasons better coloured than thisdescription would lead us to expect, especiallyif it were grown in a warm, dry situation.This seems the more probable, as Mr. Hart-weg, the collector who sent it to the Horti-cultural Society, gave it the name of pulehella(pretty), a name which has been rather cava- N 2 180 SELECT ANNUAL FLOWERS. lierly and perhaps hastily set aside by Mr.Bentham, as being only calculated to mis-lead. It would certainly at least appear, thatin the dry warm climate of California theplant was much prettier than it has yet beenseen in England. It is said to have been raised from seeds brought from California by Mr. Hartweg in1848, who found it growing in swampy placesin the Valley of the Sacramento. It is a hardy annual, requiring the sametreatment as other California!) annuals. Sownin the autumn, it flowers in May ; sown in thespring, it flowers during the summer. SELECT ANNUAL FLOWERS. The seed-sowing season is a busy one, andespecially for the amateur, who is