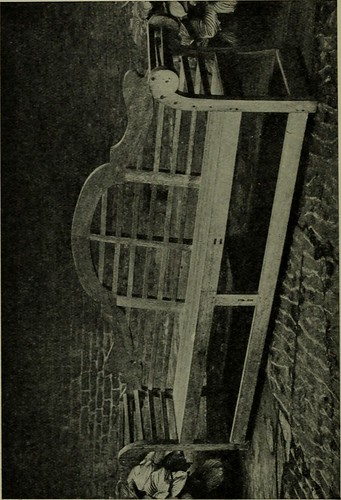 Text Appearing Before Image:
138.—At Temple Dinslev. to the difficulty of giving a seemly shape to the instrument.Mr. Halsey Ricardo has said that it has the size withoutthe handiness of an African elephant, and the elegance ofa mammoth toad. This is due in part to the practicewhich prevailed throughout the nineteenth century of fittingthe great case with three fat and unconnected legs. Aslong ago as 1900 Sir Edwin Lutyens made an interestingessay in the return to the type of design employed for theharpsichord. That instrument was usually treated as aseparate box raised upon an underframe, the legs of whichwere connected by rails and stretchers. An instrumentmade for the Paris Exhibition indicated how successfullythis idea could be carried out, but in one respect the pianofollowed modern practice. The legs were framed directlyinto the case, instead of forming a separate structure uponwhich the case rests. For a smaller piano at Marshcourt 192 Lutyens Houses and Gardens

Text Appearing After Image:
<WX w Q < Designs for Furniture 193 a simpler case was designed with detail of a rather moreclassical character (Fig. 136). These two examples haveshown a better way, and have not been without theirinfluence on the stock patterns now produced by manu-facturers on a commercial scale. We may be grateful forthis, because the type with bulbous turned legs, which heldfull sway for about a century, was as bad a solution of adifficult problem as could have been devised. Among other pieces of furniture which have felt the in-fluence of the period of William and Mary is the four-postbedstead with more or less elaborate upholstery. Two ex-amples are shown in Figs. 137 and 138. The former was madefor Great Maytham, and shows a very interesting treatmentof the valance, which is carried in one piece along the topof the window opening and round the bedstead. The design