Home » Gardening » Image from page 206 of “Farmers of forty centuries; or, Permanent agriculture in China, Korea and Japan” (1900)

Image from page 206 of “Farmers of forty centuries; or, Permanent agriculture in China, Korea and Japan” (1900)

Posted by: Pro Gardener in Gardening December 10, 2020 Comments Off on Image from page 206 of “Farmers of forty centuries; or, Permanent agriculture in China, Korea and Japan” (1900) 35 Views 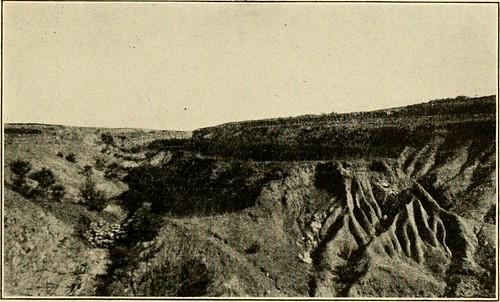 Text Appearing Before Image:
nting sweet potatoes on carefully fitted ridges of nearlyair-dry soil in a little field, the remnant of a table on a deeplyeroded hillside (Fig. 108). The husband was bringing water formoistening the soil from a deep ravine a quarter of a mile distant,carrying it on his shoulder in two buckets (Fig. 109) across anintervening gulch. He had excavated four holes at intervals up TRANSPLANTING SWEET POTATOES 203 the gulch and from these, with a broken gourd dipper mended withstitches, he filled his pails, bailing in succession from one to theother in regular rotation. The daughter was transplanting. Holding the slip with its tipbetween thumb and fingers, a strong forward stroke ploughed afurrow in the mellow, dry soil; then, with a backward movementand a downward thrust, she planted the slip, firmed the soilabout it, leaving a depression in which the mother poured about apint of water from another gourd dipper. After the water hadsoaked away, dry earth was drawn about the slip and firm and

Text Appearing After Image:
Fig. 108. – Strong erosion in Shantung, with wheat on roinuanta of tables. looser earth drawn over this, the only tools being the naked handsand dipper. The father and mother were dressed in coarse garb but thedaughter was neatly clad, with delicate hands decorated withrings and a bracelet. Neither of the women had bound feet. Therewere ten in the family; and on adjacent similar areas they hadsmall patches of wheat nearly ready for the harvest, all plantedin hills, hoed, and in astonishingly vigorous condition consideringthe extreme drought which prevailed. The potatoes were beingplanted under these extreme conditions in anticipation of the rainyseason which then was fully due. The summer before had been 204 IN THE SHANTUNG PROVINCE one of unusual drought, and famine was threatened. The govern-ment had recently issued an edict that no sheep should be soldfrom the province, fearing they might be needed for food. An oldwoman in one of the villages came out, as we wallced through, andinq