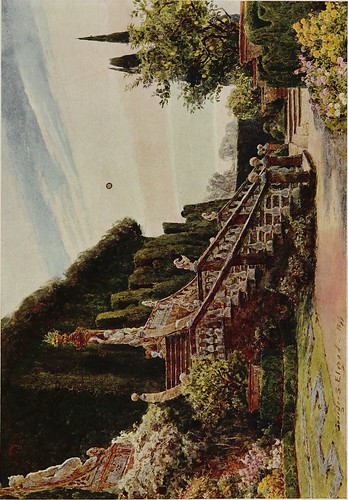 Text Appearing Before Image:
orange to richest red, and growing with the utmost luxuriance. Such aremarkable show is rare, if not unknown, in England, where, as a rule,this lovely flower does not receive the attention it deserves. Thissecond parterre is laid out on a decided slope, and its design is seen toadvantage from the entrance gate. Above this the terracing begins inearnest. Three terraces follow in succession, the sustaining walls beingseparated from each other by a space of little more than thirty feet, andthus concentrating the stairways within a comparatively small space,which gives the effect of one grand stair rather than of three separatestairways. Much ingenuity is shown in the disposition of these stairways. Thefirst leads off on either side of a fountain niche and is carried to right andleft in a single flight of some eighteen steps which land directly oppositethe commencement of the next flight. An extensive and somewhatelaborate grotto is entered by an archway beneath the second flight, the I20

Text Appearing After Image:
stairs of which (also about eighteen in number) run the reverse way tothe first and so land in the centre. The third staircase belongs to thehorse-shoe type, but its arrangement will be better understood byreference to the pictures given here than by a detailed description. Theball ornament, which has been used liberally on the lower balustrades, issupplemented on this staircase by monkeys cleverly modelled in terracotta. These monkeys, dressed in long jackets and armed with a spikedglove, are represented in the act of playing the favourite Tuscan ballgame, Giuoco del Pallone. Aping the attitudes of men, these smallbaboons are many of them intensely funny, and the artist must have beenclosely famihar with both the ball-player and the monkey tribe tosucceed in producing such an amusing series. At the head of the great stairway, supporting tall piers andguarding the opening to the cascade, are snow-white statues of nymphand satyr. Above this platform stretches the unusual triple cascade