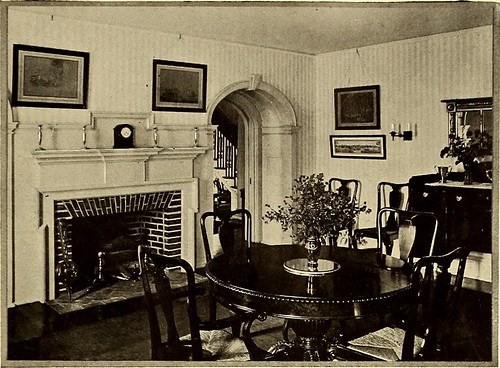 Text Appearing Before Image:
n discern is thesea. The estate, of which it is a part, isof large proportions, far removed from thehighway, and the approach is along a nar-row lane that diverges from the main roadhalf a mile south of Oldtown church. Inappearance the house is wholly unchangedfrom the date of its erection. Despite itsage, it gives no hint of decay, and were itnot for the unmistakable signs of antiquity April, 1913 AMERICAN HOMES AND GARDENS 125 evident in the bricks andplaster, the great squarechimney, and other features,one might reasonably doubtthe date of constructionassigned to it. It is built of granite variedwith other kinds of stone, in-terspersed with brick, thestone originally thickly cov-ered with plaster, which isnow crumbling away.Climbing vines relieve thesombre grayness of the gen-eral appearance, and com-bine with the grassland sur-roundings to add a note ofcolor and beauty that throwsinto relief the fine lines of Tlie dining-room construction. In build the dwelling is T shaped, with a

Text Appearing After Image:
wise discernible. The doorswings on hand-wroughtiron hinges, twenty-fourinches in length, matchingin their massiveness theporch walls which are twofeet thick. Through this doorwaythe porch proper is reached,still showing suspended fromits ceiling the leather fire-buckets used when handengines were in vogue.From an inner door accessis gained to the hallway, anapartment considerablybroader than it is deep, withstairway rising in two turns,directly in front of the en- room opening on either side of the hall, and another atthe rear. A wooden addition, built by Captain Boardmanfor the benefit of his second wife, who was an invalid andwho deemed it unhealthy to live between stone walls con-stantly, joins the main structure at the western end, follow-ing in contour the same simplicity of design, and at the rearof the eastern end are the old tenant apartments, now usedas servants quarters. Complete, the exterior presents a series of interestingfeatures. At the rear is the great chimney, ten f