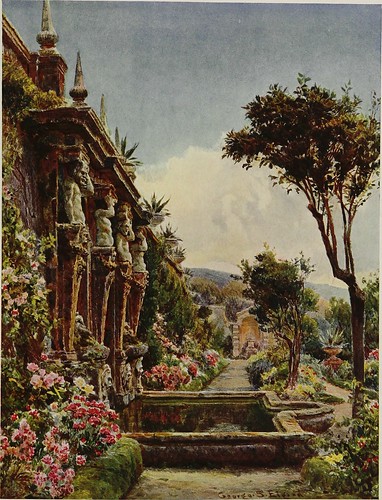 Text Appearing Before Image:
Genoa, where he was well received by PrinceAndrea Doria, who was at that time engaged in enlarging and beauti-fying the palace which had been presented to him in recognition of hisgreat services to the State. Here Perino not only decorated the principalrooms of the palace and the garden pavilion, but superintended thepainting of the garden fa9ade with frescoes qui represente des jeuxdenfants. Unhappily the paintings on this fa9ade have entirely dis-appeared, but the remains of similar decoration on other Genoese palacescarried out by his pupils give some conception of their beauty. As del Vaga appears to have been consulted on all matters of taste byhis patron, it is more than probable that the garden plan, which datesfrom about the year 1530, is also his. He would naturally be familiarwith the gardens recently laid out in the neighbourhood of Rome ;notably those of the Vatican and the Villa Madama, both of which aresaid to have been designed, in part at least, by Raphael himself, 132

Text Appearing After Image:
1 The Palazzo Doria was enlarged and remodelled by Fra GiovanniAngelo Montorsoli. It is set back but a short distance from the seashore, and is raised upon a narrow terrace, with the parterre lying on thelevel space beneath. A simple but graceful loggia, or open gallery, stretchesthe whole length of the garden facade, and was evidently designed toreceive decoration in colour. The flat roof of this loggia forms a balconyor terrace, beyond which project two colonnades dividing the terraceinto three courts or gardens. Very charming fountains of marble occupythe two outer divisions. In the court, which was formerly the orangegarden, is a singularly graceful fountain of marble which showsunmistakably the hand of Montorsoli himself It stands upon a squareplatform raised above the garden, and is approached from each side bysteps; at the four corners circular balconies project, and balustradessurround these as well as the fountain basin. Above the balustradeappears the central group, a triton