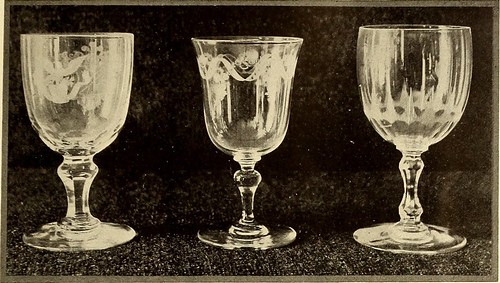 Text Appearing Before Image:
rties which arepeculiarly its own. It istransparent in itself, al-though the substances fromwhich it is made are far frombeing so. Glass, unlike manysubstances, is not subject toheat or cold, and thereforeis adapted to many uses, andits field of usefulness is con-stantly increasing. To-day it has reached astate of comparative perfec-tion, although even now it issubject to constant improve-ment, and research is beingmade to throw light upon itsdiscovery and the progress ofthe art in the ages past.Many writers claim that itsinvention dated earlier thanthe Flood. The eighteenth centuryEnglish glass shows somewonderfully fine examples,among which are old aleglasses and glass spoons withhandles showing coloredtwists. The old drawn glassdates back to the middle ofthe eighteenth century, andwas used by these old folk onGood Friday. On that daythe services were so long andof such an exhausting naturethat every member of thefamily was allowed to drink April, 1913 AMERICAN HOMES AND GARDENS i35