Home » Gardening » Image from page 248 of “Plant culture; a working handbook of every day practice for all who grow flowering and ornamental plants in the garden and greenhouse” (1921)

Image from page 248 of “Plant culture; a working handbook of every day practice for all who grow flowering and ornamental plants in the garden and greenhouse” (1921)

Posted by: Pro Gardener in Gardening April 27, 2019 Comments Off on Image from page 248 of “Plant culture; a working handbook of every day practice for all who grow flowering and ornamental plants in the garden and greenhouse” (1921) 168 Views 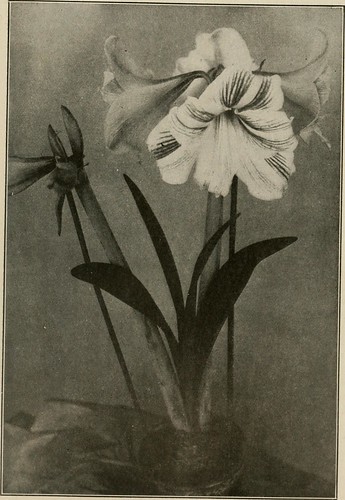 Text Appearing Before Image:
ARYLLIS. The Amaryllises vary somewhat in their propermethods of culture so that it is necessary to know that some arerightly called Amaryllis while others should be known under thenames of Hippeastrum (see p. 263,) Crinum (see p. 253,) Nerine,Sprekelia, and Zephyranthes (see p. 277.) AmaryUis Belladonnais the true Belladonna Lily. The commonest form is pink,but there are purpHsh and white varieties. The Lily flowers areborne in clusters of eight or ten upon long stems and appear beforethe leaves. It really grows wild in the Cape of Good Hope and insome parts of Italy. It is nearly hardy in the northern L^jiitedStates and planted outdoors succeeds best only where it may re-main in the open ground throughout the year. Culture in Coldframes. They may be grown very nicely inframes. The bulbs should be planted when at rest, which is in Springand early Summer, and the flowers will appear in August or earlyin September, the flower-spike preceding the leaves. After flower- BULBOUS PLANTS 245

Text Appearing After Image:
HippEASTRUM (Amarxlis)—See page 263 246 PLANT CULTURE ing, leaf growth should be encouraged as much as possible, as uponthis the next seasons flowers will depend. Plant the bulbs in theframe 8 inches apart each way; the soil best suited to them is a sandyone, made very rich with manure that has long laid in the compostheap, so there is no heat or fermentation in it. Nothing furtherneed be done, as the frame will not be covered until the flowering isover. Rapid growth immediately follows the flowering, and shouldthere be an appearance of frost before the leaves die down, the sashshould be put on, the same as over a hotbed, removing when theweather will permit. Upon the approach of Winter fill the frame,which should be about 6 inches above the soil, with leaves, put onthe sash and let them remain undisturbed until Spring. It is a goodplan to leave a slight covering of leaves over the bulbs until theyflower, which will keep the soil moist and cool. It does not matterif all the leaves