Home » Gardening » Image from page 25 of “Cyclopedia of American horticulture, comprising suggestions for cultivation of horticultural plants, descriptions of the species of fruits, vegetables, flowers and ornamental plants sold in the United States and Canada, together wit

Image from page 25 of “Cyclopedia of American horticulture, comprising suggestions for cultivation of horticultural plants, descriptions of the species of fruits, vegetables, flowers and ornamental plants sold in the United States and Canada, together wit

Posted by: Pro Gardener in Gardening November 21, 2020 Comments Off on Image from page 25 of “Cyclopedia of American horticulture, comprising suggestions for cultivation of horticultural plants, descriptions of the species of fruits, vegetables, flowers and ornamental plants sold in the United States and Canada, together wit 35 Views 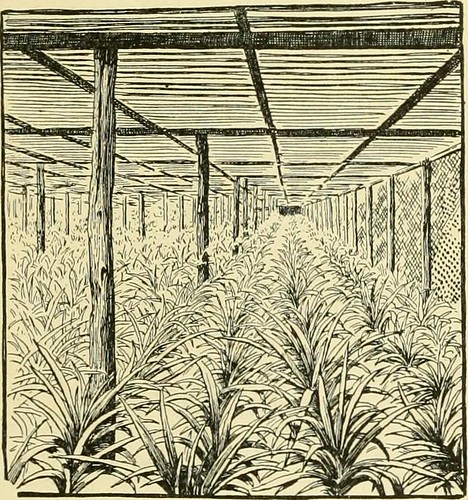 Text Appearing Before Image:
proved that this disease may be pro-duced by improper use of commercial fertilizers, thoughthe disease has occurred where no fertilizer had beenused. Abundant evidence is at hand to show that thedisease is not due to an Organic agent but rather tountoward condition in the soil. Change the fertilizer,avoiding acid phosphate, kainit and cotton-seed meal inlarge quantities, and give protection as by a Pineappleshed (spike is a rare thing under sheds). (4) Blight; wilts: This disease occurs in a sporadicmanner, usvially without any apparent regularity. Insome varieties the first intimation of blight is by theouter end of Ivs. turning red, and later by the tips wilt-ing. This wilting progresses until the entire plant hasdried up. According to Webber the direct cause is asoil-inhabiting fungus which attacks the roots. Removethe wilted plants and set in healthy ones. If the plantsare of valuable varieties trim off all diseased roots andmuch of the stem, together with larger Ivs., and reset.

Text Appearing After Image:
1812. Pineapple shed in Florida. It is probable that the fungus will not survive until theroots again penetrate the soil. (5) Red spider {Stigmceus Floridanns, Banks): Thisspecies attacks the tender white portion at the base ofthe Ivs. The effect upon the plant is greatly out of pro-portion to the small amount of injury to the partsattacked. In later stages the Ivs. rot off at the place attacked. Drop a small handful of tobacco dust intothe bud of the plants. Subsequent rains and dewsleach the tobacco and carry the solution down to the redspider. If they are not all dead in a week or ten days,repeat the dose. (6) Scale insect (Diaspis bromelieie): This scaleinsect becomes troublesome in dry localities and ingreenhouses. The insect usually attacks the lower sur-face of the leaf, but each point of attack shows throughas a yellow spot on the upper surface. Spray withresin wash, resin compound, kerosene emulsion orwhale-oil soap. (7) Mealy bugs {Dactylopins citri and other species):These

Image from page 934 of “The English flower garden and home grounds : design and arrangement shown by existing examples of gardens in Great Britain and Ireland, followed by a description of the plants, shrubs and trees for the open-air garden and their cul