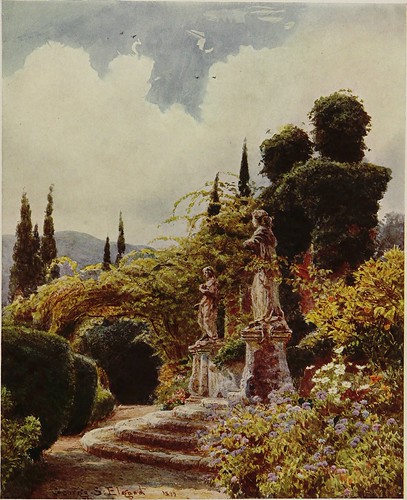 Text Appearing Before Image:
on allait de surprise en surprise— you have around you a most charming collection of trees and shrubsand flowers : eucalyptus and carouba, cedar, cypress and pine ; the peppertree, Crataegus, acacia, camellia, escallonia, veronica, kennedya, plumbago,teucrium fruticosum (the pale blue salvia, with its white woolly leaf);… an abundance of roses, principally Chinas, Teas, and Bourbons,such as Cramoisie superieure, fabvier, gloire de rosomene, safrano,gloire de Dijon, acidalie, and Bourbon queen ; phloxes, petunias,carnations, violets, mignonette, pansies; the aloe, still wearing itsscarlet glory ; hedges of the spirasa or Italian May, at rest, and ofcoronilla and red geranium intermixed, and here and there gay withflowers. The glorious view opens out before you as you go down the garden,until, reaching the central terrace, you look over the orange-trees, withred roses almost touching their golden fruit, upon the monastery and * Nice and her Neighbours. (S. Low & Co., 1881.) 144

Text Appearing After Image:
church of St. Barth616my below, upon the city of Nice, and, beyond thecity, the blue waters of the Mediterranean sea. Since this was written, many changes have taken place in the oldgarden, and not for the better, especially during the last few years. TheFountain of Venus has been daubed over with common blue, and white-wash has been applied with lavish hands to all the garden ornaments;while good trees and plants have been grubbed up to make way formore palms and fir-trees. A few more years and it will have sunk toa level with all the other hotel gardens on the Riviera, and, as thelandlord says, the visitors will like it much better. The granddaughter of the Commendatore, whom the writer met onhis last visit to the Villa Arson, writes: The Villa was bought by mygrandfather, Commendatore Pierre Joseph Arson de St. Joseph, and isone of the oldest in Nice. The east building was added by my fatherin 1863 with the intention of letting it to the King of Bavaria. Heused to come in the eveni