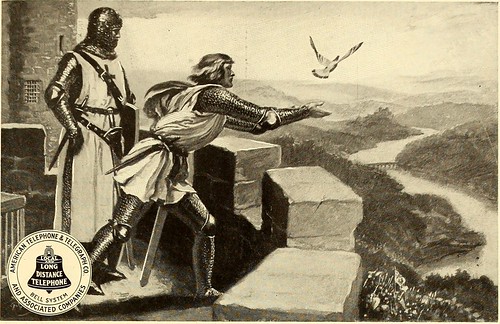 Text Appearing Before Image:
dediah Cleishbotham.These spurious romances, PontefraclCastle and The Fairy of Glas Lyn, theirunscrupulous fabricator extolled as equal inmerit to their predecessors in the series, andhe wrote an impudent letter to John Ballan-tyne in answer to the booksellers protestagainst the fraud. But Scott refused to takeany action in the matter, confident that thecounterfeits would enjoy but a brief cur-rency; and he was soon proved to be in theright, as the bogus Tales failed to reache^en a second edition, while the genuine oneshave been reprinted hundreds of times. M. Thoulet discusses such cases in LesAnnates de Ilnstitut Oceanographique andsuggests a plausible explanation. He thinkswe must accept the idea of some sort offixation around the pebbles of an envelopeof air or vapor of water. The density ofthe body transported would cease to be thatof the pebble, and become that of a mass ofcombined -olid and fluid (or gaseous) mat-ter, which would be sensibly lighter with re-spect to its volume.

Text Appearing After Image:
The Winged Message Noahs messenger was a dove. InSolomons time, pigeons were trainedto carry messages. Brutus used themat the siege of Modena. They servedthe Turks in their fights against theCrusaders. In mediaeval wars theywere more useful than ever before. France had a carrier-pigeon mailservice, with messages reduced byphotography and read through amicroscope. Even today carrier pigeons areutilized as news-bearers in isolatedparts of Europe. In America, the land of the tele-phone, the carrier pigeon is bred onlyfor racing. The winged word hastaken the place of the winged mes-senger. Pigeons may fly more than a milea minute, but the telephone is asquick as speech itself. The dove is the emblem of peace.The telephone is the instrument ofpeace. The telephone lines of theBell System unite a hundred millionpeople in one national family. American Telephone and Telegraph Company And Associated Companies One Policy One System Universal Service 12 Bungalow Plans FREE With One Years Subscrip