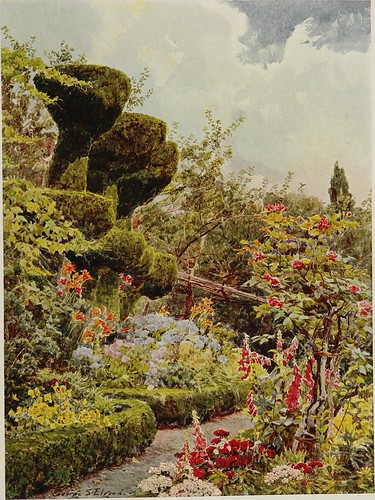 Text Appearing Before Image:
and the gardens were remodelled, at a much later date, by ConteOdescalchi. The most interesting portion of the garden, at the present day, is thegreat screen-wall that terminates the garden, with the cascade seenthrough a break in it. The former is a very picturesque piece ofeighteenth-century work, and would be still more delightful if only ithad the advantage of a good foreground of flowers and box-work in place ofthe present neglected grass and shrubs. A curving stairway leads to theopening in the middle of this screen, and on either side are wide semi-circular recesses. The wall is decorated with pilasters and entablature,enclosing niches, statues, busts, and panels of stucco-work, and terminatesabove the cornice in segmental pediments and slim obelisks. The wholesurface is encrusted with a rude stone mosaic, which, especially at a littledistance, gives a very pleasing texture. Within the screen is an ovalcourt, which encloses a large peschiera or fountain, with deep niches at 154

Text Appearing After Image:
either end, and a double stair ascends from this to the foot of thecascade. From this point a grand avenue of cypresses leads upwards to a statueof Hercules placed within a grotto. Whether at any time there was acascade here, in the ordinary sense of the word, is open to question, thewater-supply being but limited. At present it is represented by a grassyslope, flanked by stone channels. These are raised upon low walls,built in a long series of steps, to suit the slope of the ground, and downthese, in a succession of cascatelle, the water flows. Near the summit,beneath the shadow of the tall trees, are placed certain stone couches,reclining upon which an enchanting prospect is enjoyed of sparklingcascade and cypress avenue, with a vista of shimmering lake and distantmountains. Some few of the villas, scattered along the shores of the lake, displaygood bits of architectural detail in their entrance-gates and water-stair-ways. Perhaps the most notable among these is the well-known Villa