Home » Gardening » Image from page 30 of “Catalogue of vegetable and flower seeds : catalogues free to all” (1901)

Image from page 30 of “Catalogue of vegetable and flower seeds : catalogues free to all” (1901)

Posted by: Pro Gardener in Gardening October 3, 2020 Comments Off on Image from page 30 of “Catalogue of vegetable and flower seeds : catalogues free to all” (1901) 44 Views 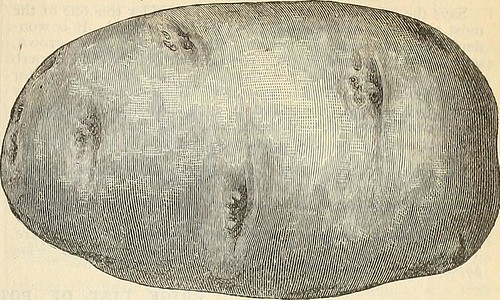 Text Appearing Before Image:
or, remarkably white, which makesit very attractive; yield, surpassing several of the heaviestcroppers knows. We were exceedingly pleased with it, andcan recommend it heartily for all light potato land. Beautifulis rather an odd word to apply to a potato, but you will be aptto use it instinctively when digging the crop. EARLY MICHIGAN. An oblong, white, handsome potato with eyes on the surface.On well enriched land this is one of the most profitable mar-ket potatoes of recent introduction. Six hundred and eighty-four bushels have been raised under high culture on a meas-ured acre. It is among the very earliest sorts, and whenplanted early will mature before dog days set in, and so escapethe rot. The clear whiteness of their skin makes them veryattractive. Our old friend. Mr. Andrew Lackey, who has beenan experimenter for over half a century, called our attention toits merits as an e?rly market sort. eleven in number, made over four bushels of finepotatoes. We were agreeably surprised.

Text Appearing After Image:
EARLY EORTTJNE POTATO. {New.) Our old friend, Mr. Andrew Lackey, a man of great enter-prise in collecting and testing everything new in every de-partment of agriculture, who first called our attention, yearsago, to the great merits of such valuable products as the BlackMexican Corn and Wards Nectar Melon, wrote us about theEarly Fortune Potato. He said that he had been testing it be-side the Early Columbus, Early Polaris, Lees Early Favorite,Early Vaughan, Early North Pole, and Early Six Weeks, andfound the Early Fortune was earlier and more productive thanany of them. He added: It has done splendidly with me tortwo seasons, and if my health would allow me to supervisetheir cultivation (he is now 82 years old). I would plant mywhole stock. I find it to be a strong grower. In form andcolon it resembles the Early Rose, but in quality it surpassesit. It is a very handsome potato. The introducer of theEarly Fortune says; it is the earliest potato in the worldand I have tested everything.

Image from page 129 of “Garden and forest; a journal of horticulture, landscape art and forestry” (1888)