Posted by: Pro Gardener in Gardening October 6, 2019 Comments Off on Image from page 308 of “The Annals of Horticulture and Year-Book of Information on Practical Gardening” (1850) 110 Views 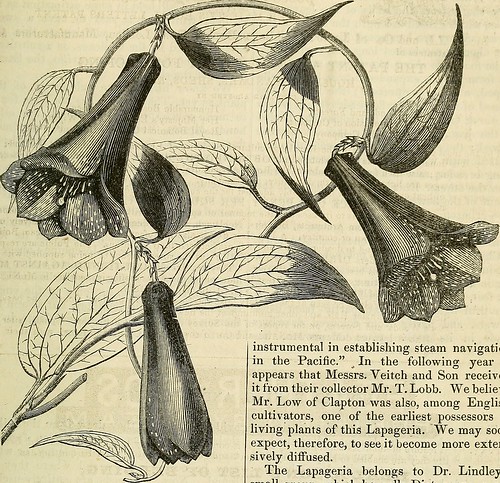 Text Appearing Before Image:
an Americanbed with success, and without difficulty.] Sowing Seeds.—In sowing seed beds fora supply of plants of any particular crop, it isbest to sow enough seed, but not too thicklyon the ground ; a store of plants is oftenfound very useful in garden culture. Recol-lect, too, that of quick growing crops a supplymust be sown frequently, little and oftenbeing a better principle to act on than its con-verse.—M. Compost for potted Plants.—A mix-ture of soils which will be suitable for growingthe generality of plants, may be preparedthus :—To three parts of the turf of a loamypasture partially rotted, add one part of turfypeat soil, such as heaths are found growing inupon our commons, and one part of cow-dungor hot-bed manure, in a completely rotted andfriable condition ; mix these ingredients welltogether, but do not sift them, except for verysmall pots. If the loam is adhesive, add aboutan eighth part of sharp sand—silver sand isgenerally preferred. —M. LAPAGERIA ROSEA. 289

Text Appearing After Image:
LAPAGERIA ROSEA. Lapageria rosea, Ruiz and Pavon (rose-coloured Lapager i a).—Philesi aceas. Lapageria looks like a Smilax, bearing theflowers of a Bomarea. To render the compa-rison more familiar, its blossoms may be said toresemble those of an immense-flowered Alstro-meria, borne along the branches of the commonblack briony (Tamus communis) frequent inour thickets and hedges. Many years agothis fine plant was figured by the Spanishbotanists, Ruiz and Pavon, in the Flora Peru-viana ; but although its existence has thus longbeen known to botanists, the plant has not,till within the last few years, been introduced ina living state into this country ; or, as far as weknow, into Europe. In the year 1847, we areinformed, that the Royal Gardens at Kewwere first favoured with one from Conception(Chili), through the kindness of R.Wheelwright,Esq., an American gentleman, who has been50. instrumental in establishing steam navigationin the Pacific. In the following year itappears that Messrs.