Home » Gardening » Image from page 322 of “Plant culture; a working handbook of every day practice for all who grow flowering and ornamental plants in the garden and greenhouse” (1921)

Image from page 322 of “Plant culture; a working handbook of every day practice for all who grow flowering and ornamental plants in the garden and greenhouse” (1921)

Posted by: Pro Gardener in Gardening April 17, 2018 Comments Off on Image from page 322 of “Plant culture; a working handbook of every day practice for all who grow flowering and ornamental plants in the garden and greenhouse” (1921) 202 Views 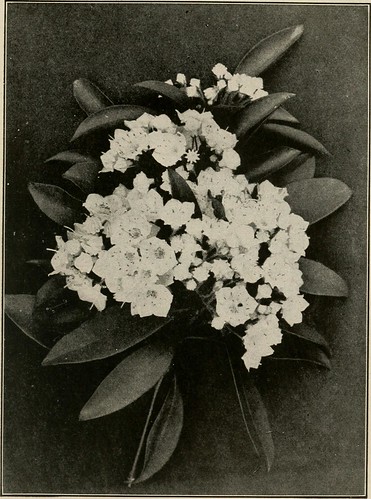 Text Appearing Before Image:
ivation we seldom see the plants flourishing equal tothose in their native habitats. K. polifolia {glauca) has lilac-colored flowers, and whitish under the leaves; K. angustijolia haspurple flowers. All three are used for forcing, imported plants beingemployed for the purpose. K. angustijolia has lateral corymbs;in K. latijolia and K. polifolia they are terminal. Manure of anykind should not be used in the cultivation of these plants. Propagation. Raised from seeds sown in peaty soil or fromhalf-ripe wood cuttings and layers. KERRIA (Corchorus). Kerriajaponica is a popular floweringshrub which is not too particular as to soil or situation. It attains aheight of about 6 feet. There are three forms—double, known ast«he Globe-flower, and single flowered and variegated. They areall good. The variegated one keeps the color in the leaves allthrough the season just as showy as in Spring; it usually bears acrop of flowers, which are bright yellow, over an inch in diameter, HARDY SHRUBS 319

Text Appearing After Image:
Kalmia latifolia (Mountain Laurel) 320 PLANT CULTURE along about the first part of May. This plant is capable of beingused as a hedge subject, as it stands clipping well. The other twokinds are more profuse bloomers, especially the double, which is thestrongest growing of the three. It is seldom without flowers allduring the Summer and Fall. It has a charming Winter effect be-cause of its green branches. Propagation. The plants are best propagated from ripegrowths during the latter part of August, indoors. KCELREUTERIA. One of the very best small sized deciduoustrees in cultivation, K. panicidata is such a tree as florists are oftencalled upon to suggest for small gardens and in places unsuitable ortoo small for the development of forest trees. The Koelreuteria wascertainly not named by anyone having its popularity in view;the long name is responsible for the plant not being more common.There is not a generally popular name under which the species isknown, the commonest name being the