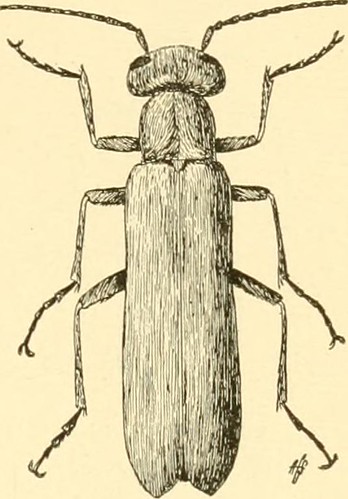 Text Appearing Before Image:
olor is black but the insectis clothed with a grayish pubescence so that its general ap-pearance is dark gray. The insect is distributed throughout BUS TER-BEE TIES 307 Canada and the United States westward to Kansas andNebraska. The life history of this insect has never been fully workedout. The beetles appear in swarms in May or June and aremore or less abundant until autumn.The female lays her eggs in irregularmasses in the ground an inch or sobelow the surface. The beetles havebeen rearefl from larvie feeding on theeggs of the Rocky Mountain locust.In Minnesota there are said to be twogenerations annually, the adults of thefirst brood appearing about the middleof June, those of the second from themiddle of August to early in September.These beetles are especially fond ofleguminous plants, pea, bean, soybean,cowpea, clover, alfalfa, black locust,honey locust, wild indigo, lupine andastragalus. They also attack potato, tomato, sweet potato,beet, radish, flax and several wild plants.

Text Appearing After Image:
Fi(i. 187. — The ash-grayblister-beetle (X 4^). The Black Blister-Beetle Epicauta pennsylvanica De Geer This insect (Fig. 188) is ^ inch or less in length and of a uni-form, dull black color. It is widely distributed throughoutthe eastern United States and Canada east of the Rocky Moun-tains. It attacks a large variety of plants, including potato,tomato, carrot, mangel, cabbage, corn, onion, chrysanthemum,pink, aster, clematis, passion flower, zinnia and alfalfa. Italso feeds on pigweed, thoroughwort, ragweed and meadow rue. This blister-beetle usually becomes abundant a little laterin the season than the other common species. The egg is pale 308 MANUAL OF VEGETABLE-GARDEN INSECTS clay-yellow, elongate elliptical and slightly less than to inchin length. The eggs are deposited in clusters of eighty to overone hundred in the ground in latesummer or fall. They hatch in twoor three weeks. The first stage larvais black, about t2 inch in length andin structure resembles that of thestriped