Home » Gardening » Image from page 34 of “Garden and forest; a journal of horticulture, landscape art and forestry” (1888)

Image from page 34 of “Garden and forest; a journal of horticulture, landscape art and forestry” (1888)

Posted by: Pro Gardener in Gardening February 28, 2017 Comments Off on Image from page 34 of “Garden and forest; a journal of horticulture, landscape art and forestry” (1888) 265 Views 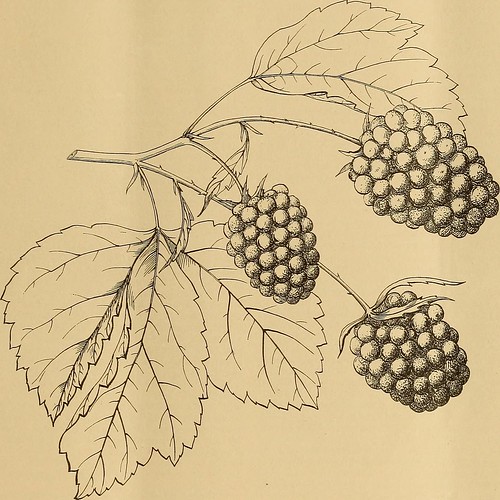 Text Appearing Before Image:
iety so far as I know. Within the past few years theLucretia and Bartells Dewberries have been rather extensivelyadvertised in nurserymens catalogues. But not all of thetestimony from those who have tried them has been favorable,though occasional reports have been very flattering. My experience with the Dewberry at Geneva, New York,was quite unsatisfactory. The variety tested was called Mam-moth, and it proved a decided failure. But in the summer of1889 I saw a small plantation of Bartells variety on the groundsof Mr. H. C. Adams, of Madison, Wisconsin, that at onceestablished my faith in the possibilities of this fruit. I wasinformed that the most productive season had passed at thetime of my visit, and that the berries which I saw were infe-rior in size to those gathered a few days earlier. But at thistime the vines were fairly well loaded with fruit of larger sizeand more attractive appearance than the finest blackberries,and, to my taste, altogether superior in quality. There is a

Text Appearing After Image:
Fig. 4.—Bartells Dewberry, natural size. veloped, and as the result our markets are now abundantly sup-plied with this delicious fruit. The tender foreign Raspberryhas been supplanted by hardy native varieties, and the samemay be said of the Gooseberry. In the north-western statesimproved varieties of the native Plum are gradually comingto the front and give promise that plums of good quality maysoon be grown in our coldest states. The Crandall Currantseems to be a step forward in the development of a newspecies that may yet prove valuable, and the dwarf Juneberryand Buffalo-berry are beginning to receive attention. Thegarden Blackberry, now a valuable market fruit, appears tohave been entirely developed in this country, and of morerecent introduction to culture is the Dewberry, which, if wemay judge from its best showings, gives promise of develop-ing into one of our most delicious and productive small fruits.It is only within a few years that the cultivation of the Dew-berry seems