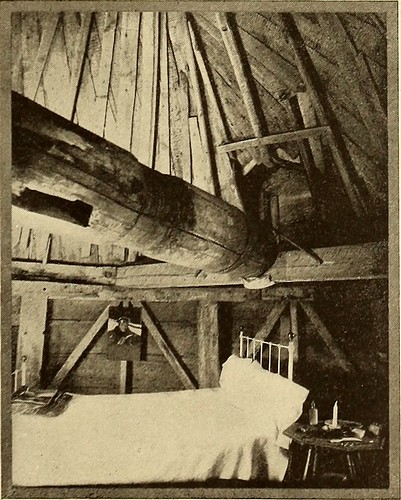 Text Appearing Before Image:
HE quaint octagonal windmills which havestood, dignified and picturesque upon thebrown hills of Cape Cod, are now silent.Their attractiveness, however, is graduallybeing discovered by the lovers of the unusualand the artistic, and they are being purchased for modern use.One of these is now converted into aSummer home, making a novel adjunctto the group of Summer cottages towhich it is added as a Guest House. The Windmill house is unique. Thereare only a few of them on the entireCape. The problem of converting thepeculiar architecture of an ancient millinto a house that would be livable andin harmony with its surroundings was adifficult one, but it was well solved byMr. J. J. H. Rothery, at his Summerhome at Cataumet, Massachusetts. The mill stands to-day far back fromthe road, crowning a rolling hill, theslope of the elevation being used to ad-vantage in adding to the mill properother buildings which were necessary inorder to accommodate a Summer house-

Text Appearing After Image:
Bedroom in the old mill hold. The windmill itself, which is the most conspicuousof the group of buildings, has three rooms in it, one on eachstory. The two upper ones are used as chambers, the thirdstory room showing the roof to the topmost peak, with thegreat timbers which were there in the early days when themill was doing duty, grinding grist forthe farmers for miles around. It would be difficult to find a cooleror more delightful sleeping place thanin the old windmill, for windows areopen to the four winds of heaven, sothat it is never too hot for sleeping pur-poses. The lower floor is the airiestkind of a living-room, and the roughhand-hewn timbers which form the in-side and which are weather beaten withage, lend themselves well to the effectiveuse of burlap, crude straw mats, and thesimple old-time furniture which isprincipally used here. The round rag mat on the floor was aparticularly happy idea, fitting into thesurroundings and adding to the sym-metry of the rooms. This house