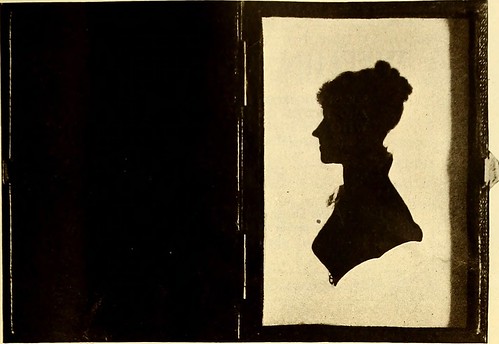 Text Appearing After Image:
portraits he ever made wasthat of Daniel OConnell,from whom he never had asitting, but whom he sawonce for about five minutesin the Chamber of Com-merce, Dublin. Many por-traits of his friends he madeentirely from memory. Edward Ward Foster pre-ceded Edouart by a fewyears and though his worknever attained the popularityof his successor it has muchcharm. Most of FostersSilhouettes were made atDerby, where he had astudio to which many celebri- arts first professional sitter was the BishoD of Bangor Silhouette portrait painted on paper. This dates from about 1850 who paid the artist five shillings for the initial por- ties found their way. He employed a machine which he is trait. Afterwards he ordered forty more at the same said to have Invented himself and which he guaranteed price. Edouarts fame quickly spread and he was soon would take Profiles of any Lady or gentleman in a manner snipping out the portraits of half the celebrities of Eng- accurately precise in Resemblance, and perform