Home » Gardening » Image from page 403 of “On colour, and on the necessity for a general diffusion of taste among all classes : with remarks on laying out dressed geometrical gardens, examples of good and bad taste, illustrated by woodcuts and coloured plates in contrast” (

Image from page 403 of “On colour, and on the necessity for a general diffusion of taste among all classes : with remarks on laying out dressed geometrical gardens, examples of good and bad taste, illustrated by woodcuts and coloured plates in contrast” (

Posted by: Pro Gardener in Gardening December 7, 2018 Comments Off on Image from page 403 of “On colour, and on the necessity for a general diffusion of taste among all classes : with remarks on laying out dressed geometrical gardens, examples of good and bad taste, illustrated by woodcuts and coloured plates in contrast” ( 145 Views 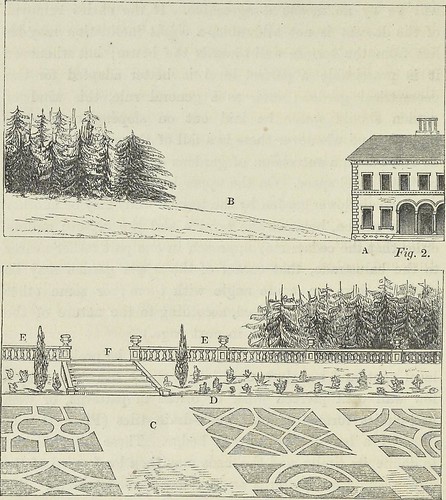 Text Appearing Before Image:
ture of theground. (See woodcut 62, in next page.) A dressed garden of less pretensions may be projected in alevel spot, and merely bounded by a slight trench and by alow wall with pierced work of bricks in patterns, or withhalf-circles formed of half main-drain tiles (Plate vi.), oreven by a low dipt evergreen hedge. These are sufficientto define its limits, and the beds may then be formed of thesame geometrical patterns as in other dressed gardens. Butthis does not really merit the name of terrace-garden, and isonly a substitute for it which may be attached to a house ofvery moderate pretensions. Some are satisfied that the patterns of the geometricalgardens should be laid out in turf, or have grass walksbetween each instead of gravel; and it is certainly easierto cut beds in turf, as in a level lawn, than to lay out 368 DRESSED OR GEOMETRICAL GARDENS. Paet III. a garden de novo; but it is not the facility of makingthe garden, it is the effect to be produced when made, (62.) Fig. 1,

Text Appearing After Image:
A, House. B, Slope. C, Geometrical garden on the slope, when lowered. D, Sloping bed against the terrace wall. E, Terrace walk and balustrade. F, Upper dressed garden. its suitableness to the character of the house with whichit groups, and other higher considerations, which are to beregarded; and though patterns in turf may answer very Part III. CHARACTER OF THE BEDS. 369 well for the less formal garden, or for one of humble pre-tensions, they are by no means suited for the dressed geo-metrical one. In this last turf walks are very troublesomet6 keep trimmed; the grass, unless constantly attended to,is deficient in neatness, and when cut is apt to litter thebeds; in wet weather they are too damp to be used as walks ;they require to be made of a breadth quite out of proportionwith the beds; they are less in keeping with the character ofthe house or the terraces and gravel walks about it; and theyfail to give an expression of finish and importance. Theybelong to another kind of garden.