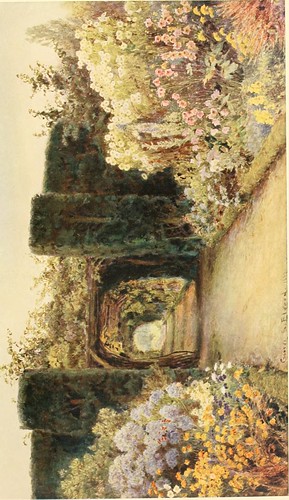 Text Appearing Before Image:
d there ; tall grass, tussocks of sedge and the rank weedsthat thrive in marshy places had it all to themselves. But the place was beautiful, for all the neglect and disorder, and tothe mind of a young girl that already harboured some appreciativeperception of the value of the fine old country buildings, and whose homelay in a valley only three miles away, Tangley was one of the placeswithin an easy ride that could best minister to that vague unreasoningdelight, so gladly absorbed and so keenly enjoyed by an eager and stillalmost childish imagination. For the mysteries of romantic legend andold tale still clung about the place—stories of an even more ancientdwelling than this one of the sixteenth century. There was always a ready welcome from the kindly farmers wife, andcomplete freedom to roam about ; the pony was accommodated in a cow-stall, and many happy summer hours were spent in the delightful 8 THE PERGOLA, GREAT TANGLEY from ihe picilre in ihe possession ofMr. Wickham Flower

Text Appearing After Image:
wilderness, with its jewel of a beautifully-wrought timbered dwellingthat had already stood for three hundred years. In later days, when the whole of the Grantley property in the districtwas sold, Great Tangley came into the market. Happily,it fell into thebest of hands, those of Mr. and Mrs. Wickham Flower, and could nothave been better dealt with in the way of necessary restoration andjudicious addition. The moat is now a clear moat again ; and goodmodern gardening, that joins hands so happily with such a beautiful oldbuilding, surrounds it on all sides. There was no flower garden whenthe old place was taken in hand ; the only things worth preserving beingsome of the old orchard trees within the moat to the west. A space infront of the house, on its southward face, inclosed by loop-holed walls ofconsiderable thickness, was probably the ancient garden, and has nowreturned to its former use. The modern garden extends over several acres to the east and southbeyond the moat. The moat is