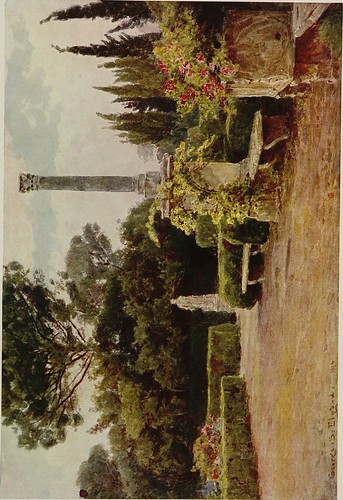 Text Appearing Before Image:
a favourite site, it occupies oneof the most agreeable and salubrious positions within the walls of Rome.On this hill, called by the ancients Collis Hortorum, were situatedthe famous ga,rdens of LucuUus, the wealthy and luxurious. Thesegardens were of the utmost beauty and magnificence, and were adornedwith many valuable statues and works of art. A portion of this site, with the Aqua Virgo flowing beneath it, theVilla Medici is supposed to cover. It overlooks that part of the citywhich was once the Campus Martins, towards the Vatican Palace andgardens, St. Peters, the Janiculum and Vatican Hills, with Mte. Marioto the right. Begun towards the middle of the sixteenth century fromdesigns of Annibale Lippi, for Giovanni Ricci of Mte. Pulciano whomPope Julius III. made a Cardinal in 1551, it passed shortly after-wards into the hands of Cardinal Ferdinando Medici, son of Cosmo I., who succeeded his brother Francis as third Grand Duke of Tuscany,whom he is credited with having poisoned. 18

Text Appearing After Image:
It has been suggested that Michael Angelo designed the gardenia9ade of the palazzo, but this is disputed or at least does not appear tobe proved. That it is a remarkably successful work and worthy of anymaster, no one can deny. The cleverness and originality of thedecoration of this fafade with its playful beauty and delicate grace liftIt out of the ordinary, and render it essentially suitable to its gardensurroundings. As seen from the garden the effect of the palazzo, withits slightly projecting wings, its higher middle portion flanked by turretsand turret balconies with the connecting balustrade, once adorned withstatues, as at the Villa Borghese, is faultlessly beautiful. Noticeable too is the superb loggia, with its antique columns ofgranite and cippolino placed so as to command the garden, for it shouldnot be forgotten that the prospect from these garden loggie was of greatconsequence, since they were intended to play such an important part inthe daily life. The most essential p