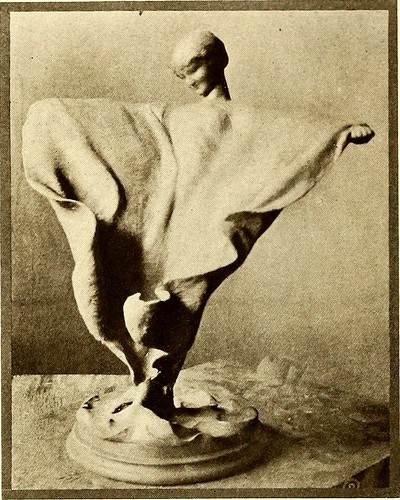 Text Appearing Before Image:
rtrait of an Indian of the type that is rapidly passing out the country and occupies an honored place in many ofaway. This figure, two and one half feet high, is especially its homes through the artistic treatment of a fine idea. suited for the decoration of the libraryor the living-room of a country house. If of the making of books there isno end, it may be equally said that thereis no end to the making of studies ofthe most picturesque figure in Americanhistory, Abraham Lincoln. Of the lat-est ones in life size is that illustrated,by Gutzon Borglum, a rugged and char-acteristic portrait. Almost every homehas a place for so splendid and forcefula work of art as this, which would bewell suited to a library, drawing-roomor living-room. Still another subject of dignity andstrong appeal to the American, is thecast from the original model of GeorgeWashington, by J. Q. A. Ward. Thisfine example of early American sculp-ture may be obtained in its originalsize, namely twenty four inches, and

Text Appearing After Image:
Another bronze suitable for the highbook-case or cabinet is the SpreadEagle, of Miss Harriet Frishmuth.The original of this small bronze, illus-trated, measures about nine feet fromtip to tip, and is considered the mostvirile interpretation of the nationalbird ever created. The spread of thissmall model, from which the largerone was made, is twenty four inches andis rendered particularly interesting bythe technique of the feathers on the re-verse side of the wings. Of the animal subjects there is, ofcourse, endless variety, but perhaps oneof the most interesting is The PoloPlayer, a clever modern presentmentby Charles Carey Rumsey. This splen-did portrayal of a homely Texas quar-ter horse with its rider is of a group sofull of sporting atmosphere and so true Copyright by IV. D. Paddock. The Little Ship, by W. D. Paddock would form a very interesting note in a Colonial house, to type in every particular that it should appeal to every One of the most distinctive applications of the art