Home » Gardening » Image from page 50 of “European and Japanese gardens; papers read before the American Institute of Architects ..” (1902)

Image from page 50 of “European and Japanese gardens; papers read before the American Institute of Architects ..” (1902)

Posted by: Pro Gardener in Gardening March 26, 2019 Comments Off on Image from page 50 of “European and Japanese gardens; papers read before the American Institute of Architects ..” (1902) 167 Views 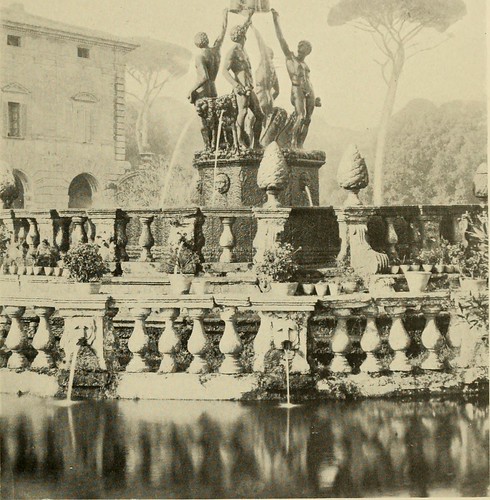 Text Appearing Before Image:
rence passage through underground conduits, in the form of cas-cades, in which its fall is broken again and again by marblesteps, basins and rockeries, massive cataracts, and lofty jets.The roar and agitation of powerful masses of water were rarelyattempted or desired; they would have been out of scale, so tospeak, out of harmony with the refined elegance of the gar-dens. Great skill and taste were evinced in the design of thearchitectural and sculptural elements of these water works,which display generally the same sense of proportion andscale that has been already referred to, and there is often atouch of the grotesque, of humor and exaggeration in theaccompanying sculpture, which like that of some of the statueson the terraces, enlivens the scene with a suggestion ofcomedy. Three typical examples of the handling of the water arefurnished by the Villas Lante at Bagnaia and dEste at Tivoli,and the palace gardens at Caserta. In the first-named, largely 36 European and Japanese Gardens

Text Appearing After Image:
FOUR SUPPORTING FIGURES BEARING THE INSIGNIA OF THE FARNESE FAMILYThe Central Fountain Villa Lante, Bagnaia Vig-nolas work, the amount of water used is infinitesimal, andall the fountains are treated with great refinement of detailand smallness of scale, while in the flower-garden the fountainis chiefly sculptural, with four supporting figures bearing theinsignia of the Farnese Family, for whom it was built. 37 The Italian Formal garden At Tivoli, where there is too much water rather than notenough, and where the upper grades are very steep and the lowerones very gradual, the upper terraces of the Villa dEste aboundin monumental fountains and cascades, as well as in the ruinsof innumerable trick fountains and aquatic eccentricities orig-inally designed to be set in operation by the unwitting stepsof the visitor. Among them was formerly a celebrated waterorgan, now ruined and silent. The central cascade, or line ofcascades, was of great volume, proportioned to the large scaleof the who