Posted by: Pro Gardener in Gardening October 1, 2016 Comments Off on Image from page 50 of “Old-fashioned flowers and other oper-air essays” (1906) 265 Views 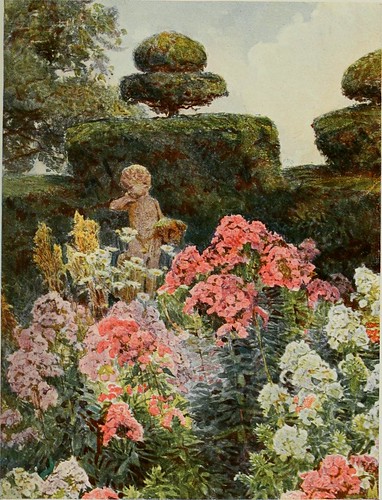 Text Appearing Before Image:
ost of them,down to the simplest and commonest,are new beings, freedmen, exiles, up^starts, visitors, foreigners. Any botaniccal treatise will reveal their origins.The Tulip, for instance (rememberLa Bruyeres *Solitary,* * Oriental,Agateand Cloth of Gold), camefrom Constantinople in the sixteenthcentury. The Buttercup, the Moon-wort, or Honesty, the Caltrop, theBalsam, the Fuchsia, the African Marigold, or Tagetes Erecta, the Rose33 OLD-FASHIONED FLOWERS Campion, or Lychnis Coronaria, the Variegated Aconite, the Amarantus Caudatus, or Love-lies-bleeding, the Hollyhock and the Campanula Pyra^ midalis arrived at about the same time from the Indies, Mexico, Persia, Syria and Italy. The Pansy appears in 1613; the Yellow Alyssum in 1710; the Perennial Flax in 1775; the Scar^ let Flax in 1819; the Purple Scabious in 1629; the Saxifraga Sarmentosa in 1771; the LongIeaved Veronica in 1731. The Perennial Phlox is a little older. The China Pink made her cn^ trance into our gardens about 1713.34

Text Appearing After Image:
G. S. ElgooJ, Andre & Sleigh, Ltd. The old, paternal Phlox/ p. 34. OLD-FASHIONED FLOWERS The garden Pink is of modern date. The Portulaca did not make her ap* pearance till 1828; the Scarlet Sage till 1822. The Ageratum, now so plentiful and so popular, is not two centuries old. The Elichrysum, or Xeranthemum, is even younger. The Zinnia is just a centenarian. The Spanish Bean, a native of South America, and the Sweet Pea, an immigrant from Sicily, number a little over two hundred years. The Chamomile, whom we find in the least – known villages, has been cuhivated only since 1699. The35 OLD^FASHIONED FLOWERS charming Blue Lobelia of our borderscame to us from the Cape of GoodHope at the time of the FrenchRevolution, The China Aster, orReine Marguerite, is dated 1731. TheAnnual or Drummond^s Phlox, nowso common, was sent over fromTexas in 1835. The large^floweredLavatera, or Tree^Mallow, who looksso confirmed a native, so simple arustic, has blossomed in our northerngardens only si