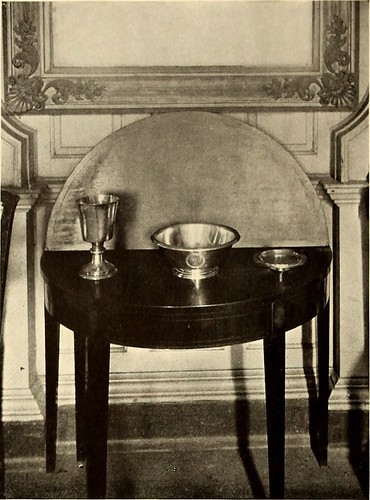 Text Appearing Before Image:
ow, Are, in Order, Portraits of Mrs. Benjamin Harrison, Lady Betty Claypole, Governor Parke, Evelyn Byrd and Lord Halifax 336 AMERICAN HOMES AND GARDENS September, 1907 was carried by Evelyn Byrd whenshe was presented at court inEngland. Over the mantel in the dining-room is a portrait of GovernorAlston, by Benjamin West, andaround the room, beginning onthe right, are portraits of theDuke of Argyll (Jeanie Deansfriend), Benjamin Franklin, Mrs.Taylor, Colonel Byrds wifessister, Sir Robert Walpole, theDuke of Albemarle, ColonelWilliam Byrd, Mr. Randall andMr. Waltho. All told, a goodlycompany of notable men andwomen, painted, for the mostpart, by painters of distinguishedeminence. At some distance to the west ofthe house are brick buildings in-tended for the storage of pro-visions. Beyond them is the familyburying ground. The tombs,however, are mostly modern, ex-cept those of Benjamin Harrisonand his wives, which were broughthere from Old Brandon Church.On the way thither one passes the

Text Appearing After Image:
The Communion Service Presented by John Westhrope tothe Parish of Martins Brandon. Date about 1 659 Virginia, while the owner of largeestates, does not appear to havebeen connected either with Bran-don or Berkeley, the famous seatsof this family on the James River.His son, Benjamin Harrison theSecond, was born in Surry County,Virginia, in 1645. Colonel Na-thaniel Harrison, the son of thesecond Benjamin, became theowner of Brandon, and was thefirst of the family to be definitelyassociated with the estate. Hewas born in 1677 and died in1727. It was his son, likewise,named Nathaniel, who built thepresent mansion, or at least itsoldest parts. He was born in1738. He was succeeded in theownership of Brandon by his thirdson, Benjamin Harrison, whoseportrait still hangs on the walls ofthe drawing-room of the mansion,together with the portraits of histwo wives, the first of whom wasAnne, daughter of William Ran-dolph, of Wilton, and the second,Evelyn Taylor, the daughter of Colonel William Byr