Home » Gardening » Image from page 609 of “The Garden : an illustrated weekly journal of gardening in all its branches” (1871)

Image from page 609 of “The Garden : an illustrated weekly journal of gardening in all its branches” (1871)

Posted by: Pro Gardener in Gardening February 15, 2021 Comments Off on Image from page 609 of “The Garden : an illustrated weekly journal of gardening in all its branches” (1871) 15 Views 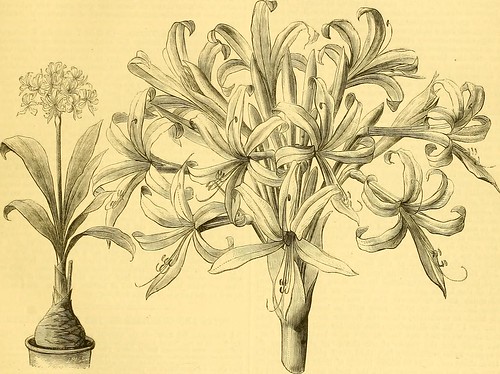 garden : an illustrated weekly journal of gardening in all its branches" (1871)">

Text Appearing Before Image:
ofthe house, they had a strikingly grand effect. Standing near themwere two splendid examples of C. lobata, bearing fourteen spikeswith from five to seven flowers each. I also noticed four or five Masderallias, amongst which was a grand example, bearing ninespikes, of the one known amongst Orchid growers as the BuUs-bloodvariety (11. Harryana sangninea) ; it may be said there is nothing ina namo, but surely this is an ill.chosen name for such a magnificentliovrei: t. Baines. Griffinia ornata.—This is a bsautiful, new wlnter-blooming,bulbous plant, from Brazil. It has elliptic-oblong leaves, the mar.gins of which are so much recurved that a cross section would almostdescribe a gemi.circle. The flower.scape is from 12 in. to 18 in. inheight, and bears an umbel consisting of about two dozen flowers,forming a spreading head of some 8 in. or 9 in. in diameter.The flowers are of a delicate bluish.lilac fading off to nearly white,and remaining for a considerable period in beauty. Some good

Image from page 19 of “War vegetable gardening and the home storage of vegetables ..” (1918)