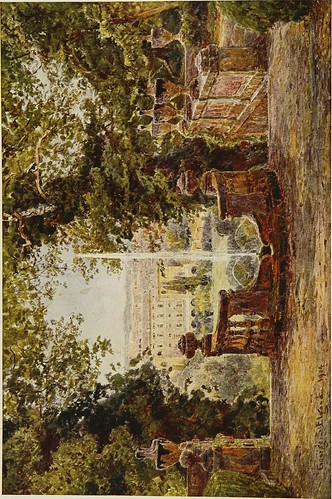 Text Appearing Before Image:
rchitect intended them to be. Hawthorne gives a pleasant description of the gardens as they werebefore they passed out of the hands of the Pope. They are tery 27 extensive, and laid out in straight avenues, bordered with walls of box,as impervious as if of stone—not less than twenty feet high, and piercedwith lofty archways, cut in the living wall. Some of the avenues wereovershadowed with trees, the tops of which bent over and joined oneanother from either side, so as to resemble a side aisle of a Gothiccathedral. Marble sculptures, much weather-stained, and generallybroken-nosed, stood along these stately walks; there were manyfountains gushing up into the sunshine; we likewise found a richflower-garden, containing rare specimens of exotic flowers, and giganticcactuses, and also an aviary, with vultures, doves, and singing birds.We did not see half the garden, but, stiff and formal as its generalarrangement is, it is a beautiful place—a delightful, sunny, and sereneseclusion. 28

Text Appearing After Image:
VILLA CORSINI The Villa Corsini lies on the slopes of the Janiculum at the rear of thePalazzo Corsini, now the Royal Academy of Science. Purchased by theGovernment about 1884, the lower part of the grounds was devoted tobotanical gardens, the upper being included in the grounds which areattached to the Passeggiata Margherita. Whether this could ever havebeen considered one of the great architectural gardens it is not easy tosay, owing to the fact that the government officials, for the sake of doingsomething to justify their possession, grubbed up the ancient bay hedgesand cut down good trees, planting in their place rows of palms and firsand other inappropriate vegetation. Of the architectural features and works of art a few rather poor bustsand statues only remain, together with the Triton fountain and a stair-way with its accompanying cascade. The Villa is now in a nondescriptstate, at least so far as the part near the palazzo is concerned. But whata charming botanical garden could