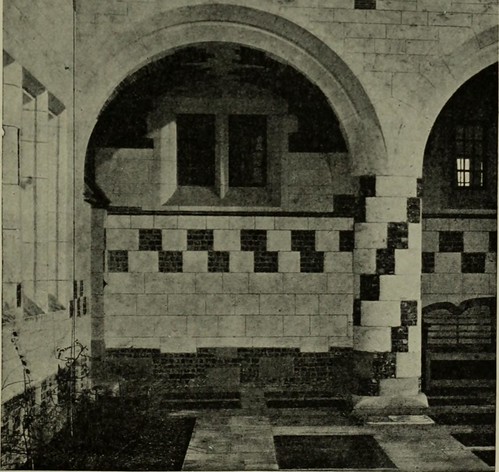 Text Appearing Before Image:
40.—Marshcourt : Part of South Front seen across Pool garden. ing reliance on the motifs which informed the design ofthe eighteenth century. Marshcourt shows the art of SirEdwin in its gayest mood. It is, indeed, the richest ex-pression of his earlier manner, when the romantic qualityof Tudor building influenced him most strongly. It wasbuilt at a time when he had already developed that full Chalk, Flint and Brick 61 mastery over material which has done so much to givefreshness and distinction to his work. The career of a single man may well show a developmentof design which represents centuries of change in aestheticoutlook. It took sixty years of Norman Shaws full andsplendid career to travel from his early work in the Gothicmanner to the fine classical flavour of his last house, Chesters.With the younger men the speed of development is greater.In twenty years Sir Edwin passed from his early exercises HBO BB

Text Appearing After Image:
m ■ Vli % i» 41.—The Loggia at Marshcourt—Chalk and Br 62 Lutyens Houses and Gardens