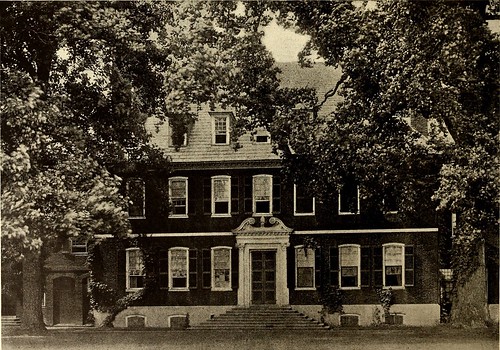 Text Appearing Before Image:
and could have placed his resi- dence wherever he thought proper, he chose this site uponwhich Westover is built, for the reason that Nature hadendowed it magnificently, with its high plateau gracefullystudded with fine trees and shrubs, and the mansion waserected in due order and in such a position that it was placedjust far enough from the river to insure the retirement whichhe sought. The main approach to the house is through alofty gateway, the stone pillars of which are about ten feethigh and are surmounted by eagles. From these stone pil-lars swing handsome gates of hammered iron, which weremade in England for Colonel Byrd, and are particularly in-teresting as being the first ornamental iron work broughtinto America. The monogram of Col. William Byrd isinterwoven in the scroll at the top of the gate. Extendingin either direction from the gateway is an iron fence, themany posts of which are surmounted by ornamental tops, adifferent design for each post. Passing through the chief

Text Appearing After Image:
Fine Old Trees Shade the River Front of the House ■ November, 1907 AMERICAN HOMES AND GARDENS 415 gateway one enters the court in front of the house. The impres-sion at once obtained of the mansion is its generous proportionsand its elongated effect. It is a large central building, threestories in height, surmounted by a hipped roof, relieved by a rowof dormer windows. Colonnades, extending in either directionfrom the main building, connect with wings, one containing thekitchen and service rooms and the other the loggia and theballroom. The house was built in a most substantial manner, and in thosedays when honest workmanship was preferred to shoddy display.It is constructed of red brick, which have grown old with age, har-monizing well with the black of the steep slated roof, that blendsinto the deep green of the superb tulip poplars which sweep the of hammered iron in which the arms of the Byrdfamily are interwoven, but are almost lost in theluxuriant growth of vines which overhan

Image from page 367 of “Cyclopedia of American horticulture, comprising suggestions for cultivation of horticultural plants, descriptions of the species of fruits, vegetables, flowers and ornamental plants sold in the United States and Canada, together wi

British Library digitised image from page 139 of “Sprays from the Garden: poems, songs and prose sketches … With introduction by D. H. Edwards”