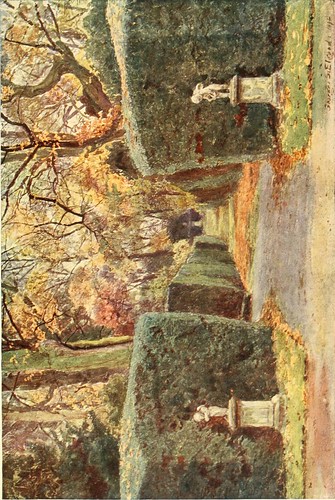 Text Appearing Before Image:
ntury the art of lead castingcame to great perfection in England. Some good models came fromItaly ; the original of the kneeling slave at Melbourne is consideredto have come from there. Others were brought from France. Theinspiration, if not the actual designs or moulds, of the many charmingfigures of amorini in these gardens must have been purely French. Thepictures show how they were used. They stand on pedestals at severalof the points of departure of the green glades. In fountain basins theyform jets ; the little figure appearing to blow the water through aconch-shell. They are also shown, sometimes singly, sometimes inpairs, disputing, wrestling or carrying a cornucopia of flowers. Onelittle fellow, alone on his pedestal, is whittling his bow with a tool like awheelwrights draw-knife. All are charming and graceful. They areprobably more beautiful now than of old, when they were painted andsanded to look like stone. mklbourxj:: amorini IlCITRK IN IHK l>()hSK> Mr. I. W. Fori.

Text Appearing After Image:
There were several lead foundries in London early in the eighteenthcentury for the making of these garden ornaments. The foremost wasthat of John Van Nost. Mr. Lethaby in his book, on Leadwork tells usthat this Dutch sculptor came to England with King William III. ;that his business was taken in 1739 by Mr. John Cheere, who served histime with his brother. Sir H. Cheere, who made several of the Abbeymonuments. The kneeling slave, bearing either a vase, as at Melbourne,or a sundial as in the Temple Gardens in London, and in other pleasuregrounds in different parts of the country, was apparently a favouritesubject. The figure, not always from the same mould in the variousexamples, but always showing good design, was evidently of Italianorigin. Towards the end of the century, designs for lead figuresbecame much debased, and such subjects as people sitting round atable, painted like life, could not possibly have served any decorativepurpose. The natural colour of lead is so good that no p