Home » Gardening » Image from page 744 of “Arboretum et fruticetum Britannicum; or, The trees and shrubs of Britain, native and foreign, hardy and half-hardy, pictorially and botanically delineated, and scientifically and popularly described; with their propagation, culture

Posted by: Pro Gardener in Gardening September 15, 2020 Comments Off on Image from page 744 of “Arboretum et fruticetum Britannicum; or, The trees and shrubs of Britain, native and foreign, hardy and half-hardy, pictorially and botanically delineated, and scientifically and popularly described; with their propagation, culture 19 Views 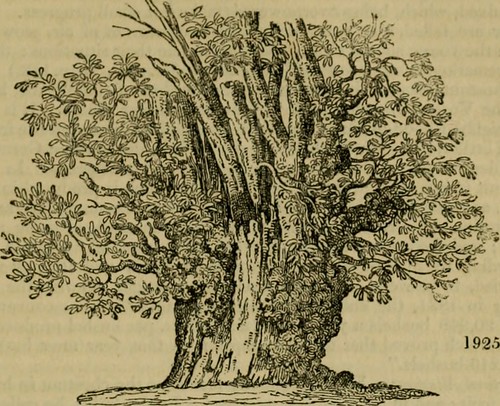 Text Appearing Before Image:
famous in his time for its chestnut trees; and the town ofCheshunt, in Hertfordshire, is supposed to have derived its name from thenumber of chestnut trees that formerly grew there. Old Tusser, in 1562,enumerates chestnuts, in his list of fruit trees which may be transplanted inJanuary; and Lord Bacon mentions the chestnut in his Essai/ on Plantations.The tree, however, if once plentiful, appears soon to have become compara-tive scarcely; for the author of a tract entitled An old Thrift newly revived,published in 1612, recommends planting the chestnut as a kind of timbertree of which few grow in England; and which, he adds, will not only pro-duce large and excellent good timber, but good fruit, that poore people,in time of dearth, may, with a small quantitie of oats or barley, make bread of.He also says that a chestnut tree, when you begin first to plant it, will growmore in one yeare, than an oake will doe in two. (p. 7.) Mr. Samuel Hartlib, VUAV. cv, fORYi,.V:i:/i:. casia^nka. 1989

Text Appearing After Image:
who wrote some jears aitci wards, says, In divers places of Kent, as in andabout Gravesend, in the countrey, and elsewhere, very many prime timbers oftheir old barns and houses are of chestnut wood; and yet there is now scarcea chestnut tree within 20 miles of the place, and the people altogether ignorantof such trees. This sheweth that in former times those places did aboundwith such timber. (Lcgari/, &c , p. 18.) A proof how early the idea pre-vailed of the wood of t^uercus sessiliflora being that of the chestnut. Inthe year 1676, an ancestor of the family of Wyndham of Felbrigg, in Nor-folk, was said to be a great Planter of chestnuts; and some account of histrees will be found in a succeeding page. The tree, however, was compara-tively neglected, till towards the latter end of the last century; when theSociety of Arts, reviving the idea (which, as we have seen above, was cur-rent as long ago as the time of Henry VIII.), that the carpentry of many ofour old buildings consisted

Image from page 299 of “The standard cyclopedia of horticulture; a discussion, for the amateur, and the professional and commercial grower, of the kinds, characteristics and methods of cultivation of the species of plants grown in the regions of the Unite

Arthur “Gramp” Roos (center) with the gardening class at Edenwald

Image from page 188 of “Garden and forest; a journal of horticulture, landscape art and forestry” (1888)