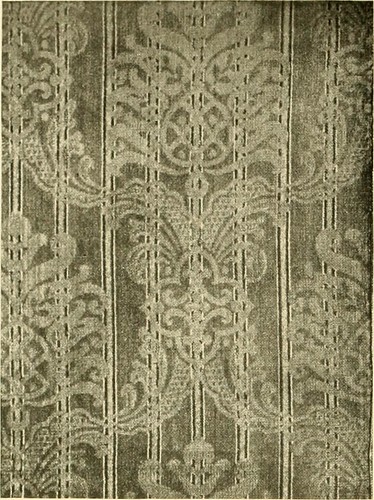 Text Appearing Before Image:
ses and other florals, basketsof flowers, and vases (Plate XIII of Chapter II), medallions, musicaland gardening instruments, and especially ribbons gracefully twistedand knotted. Stripes (Plates XIV and XV of Chapter II) and ovalshapes of various kinds are common, and parallelism of motifs isfrequent. DIRECTOIRE AND EMPIRE While the Empire style is also Classic, it is classicism of anentirely different kind. It was a reaction from the delicate and thegraceful to the grand and the bombastic. It possesses the kind ofshowy magnificence by which the multitude is impressed, and for thatreason its influence was dominant long after Napoleon met his Water-loo. It is the least French of all the French styles, and copied classicornament boldly and baldly instead of adapting it to modern con-ditions. It apes the severity of republican Rome and the grandiosityof imperial Rome. It is essentially a warlike style. Flaming torches,eagles, stars, triumphal wreaths and mythological emblems like the 4y