Posted by: Pro Gardener in Gardening October 6, 2016 Comments Off on Image from page 84 of “The cottages and the village life of rural England” (1912) 358 Views 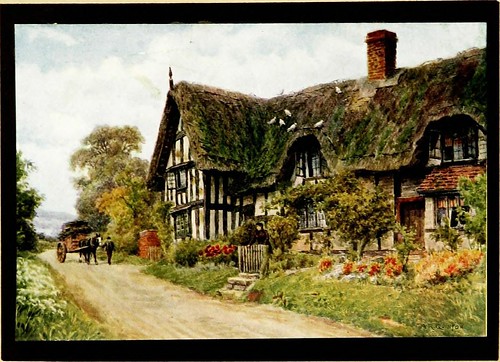 Text Appearing Before Image:
ort of the upper storey.Sometimes grotesque figures or carvings of saints or arms werecarved upon them. On each side of the house upright postswere set up between the two corner posts and fastened intohorizontal beams at the top and bottom of the face. Then hori-zontal beams were fastened into the corner posts and bevelled intothe upright posts, and thus the framework of the side completed,a similar process being adopted on the other three sides. Thenext task was to fill up the interstices. Some of these were leftfor the windows to be fitted in and a doorway provided, andthen laths were fitted into slots in the posts, and wattles orrods of hazel were woven in and out of the laths. These wouldscarcely serve to keep out the winds and rain. Hence they werecovered over with daub, a mixture of clay and straw or cow-dung, and when dry this coating was colour-washed, usually in the South of England with a yellowish hue, or whitewashed in* The Evolution of the English House, by S. O. Addy. 42

Text Appearing After Image:
GREAT COMBERTON, WORCESTER This village of Great Comberton, Worcestershire, is in the beauti-ful Vale of Evesham, under the Bredon Hills. The hills, in a grey,sombre tint, form a pleasing background to a rich thicket of oaksthat border the southern bank of the Avon near to it. The houseshown in the sketch is a charming specimen of the farmhouse type.The nearness of the upright timbers of the projecting gable betokenan early date, probably the early part of the sixteenth century,the portion on the right of the picture having been added later.A pinnacle crowns the gable, the thatch boldly projecting beyondthe walls, which are composed of timber, the interstices being filledwith wattle and daub. The thatch is a work of art, and is madeto curve gracefully over the windows of the upper storey. LIFE OF RURAL ENGLAND Cheshire, the wooden beams and posts in the North Countrybeing painted black. Hence the magpies. Amateur architects always forget something, a door or a stair-case, or something