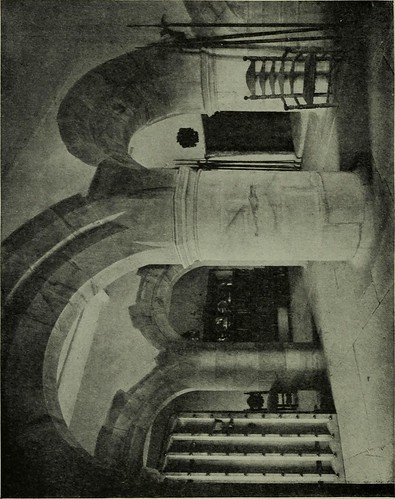 Text Appearing Before Image:
0 o w X H w.J H1/5 o u t/5 >-i Q l-H ON 84 Lutyens Houses and Gardens passage to the two original vaulted rooms, now the dining-room and the ship room (Fig. 59). Neither has beenmaterially altered, but, in both, the original little openingshave been enlarged and fitted with traceried windows :the ship room also was lengthened a little at its west end,and a new fireplace built. The stairway to the upper battery from this level has abranch to the right some six steps up, which leads to thefirst-floor rooms on the upper battery level. At the headof this branch is a passage which leads eastwards to the

Text Appearing After Image:
HV) W sf XH oin og 3oo XHV. W < o w< (/I Sz Lindisfarne Castle 85 old rooms. Westwards is a flight of four steps, curvedon plan, which gives access to the gallery. This is whollynew and connects the east and west blocks of the castle,which were originally separate. The western building wasa separate guard-house, approached from the upper battery.On the north of what is now the long gallery was anotherbattery known as Elizabeths. This has been occupied bythree new bedrooms, built in 1912. From the upper batterythere is an enchanting view across to Bamburgh Castle,over the village which groups round the ruins of the priorychurch of Lindisfarne, and cunningly disposed steps enableus to climb on to the leaded roofs of the castle and thenceto sweep the sea view to the Fame Islands and beyond tothe horizon. Needless to say, Nature and the Tudor builders of Lindis-farne had given to the castle a romantic quality which nomodern building could hope to achieve, but it was SirE