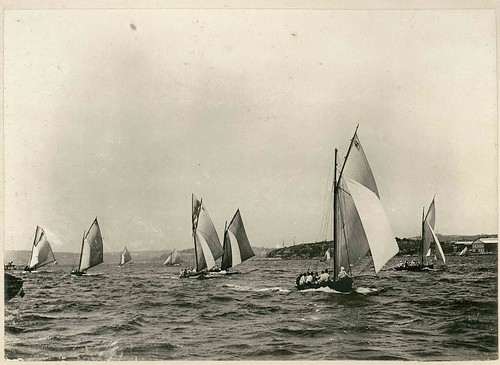 This photograph belongs to a professionally produced album that contains 9 photographs of the 1895 Prince Alfred Yacht Club Regatta. The Prince Alfred Yacht Club is believed to have been first established on 15 October 1867 and received its Royal designation in 1911. The club is still in operation and is located at Green Point, Newport on Sydney’s northern beaches. On the 14 December 1895 the club held a regatta on Sydney Harbour for a variety of sailing and rowing vessels. The Commodore Samuel Hordern was in command of the steam yacht BRONZEWING on the day and was accompanied by the flagship ALATHEA.

If reproduced or distributed, this image should be clearly attributed to the collection of the Australian National Maritime Museum; and not be used for any commercial or for-profit purposes without the permission of the museum. For more information see our Flickr Commons Rights Statement.

The Australian National Maritime Museum undertakes research and accepts public comments that enhance the information we hold about images in our collection. If you can identify a person, vessel or landmark, write the details in the Comments box below.

Thank you for helping caption this important historical image.