SS GABO berthed with HMAS AUSTRALIA I at Garden Island

Posted by: Pro Gardener in Gardening July 28, 2017 Comments Off on SS GABO berthed with HMAS AUSTRALIA I at Garden Island 219 Views 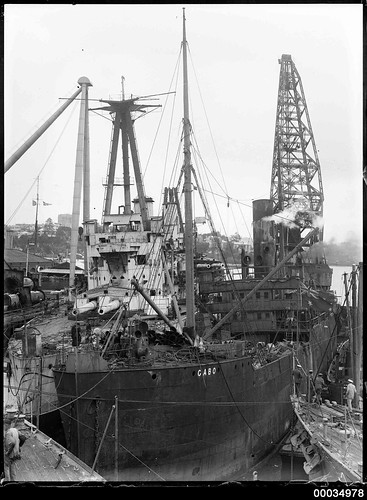 This image depicts SS GABO and HMAS AUSTRALIA I being dismantled at garden Island, Sydney. AUSTRALIA was being prepared for scuttling, which took place on 12 April 1924.

An article in ‘The Sydney Morning Herald’ describes the scene of dismantling:

‘A glance from her decks down… afforded a small glimpse of what had been taken from her. There was an array of boilers, pumps, winches, portion of her steel topmast, hawsers, ventilators, solid shells, dynamos, boiler drums and tubes a propeller with only three blades, great lengths of piping, and a host of fittings that go to make up a fighting ship.

On her main and quarter decks there was a scene of devastation. Her eight 12-inch guns still point fore and aft, but they are no longer guns. The oxy-acetylene flame has cut the barrels half through in the middle, and just enough remains to keep the barrel rigid.’

This photo is part of the Australian National Maritime Museum’s Samuel J. Hood Studio collection. Sam Hood (1872-1953) was a Sydney photographer with a passion for ships. His 60-year career spanned the romantic age of sail and two world wars. The photos in the collection were taken mainly in Sydney and Newcastle during the first half of the 20th century.

The ANMM undertakes research and accepts public comments that enhance the information we hold about images in our collection. This record has been updated accordingly.

Image from page 823 of “The English flower garden and home grounds : design and arrangement shown by existing examples of gardens in Great Britain and Ireland, followed by a description of the plants, shrubs and trees for the open-air garden and their cul

3 Gardening Books by Simon and Schuster encyclopedia of practical